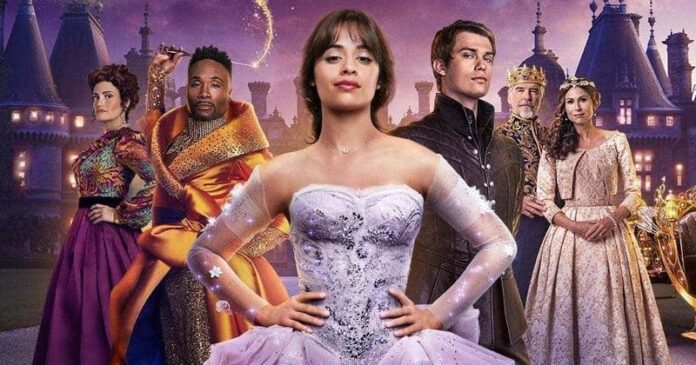 Are there new ways to tell the Cinderella story? Probably not. There have been updates and reimaginings and musicals and even horrors based on the classic fairy tale. The challenge for Pitch Perfect writer and Blockers director Kay Cannon isn’t to do something that’s particularly new, but to present the classic princess story in a way that matters for right now and speaks to a different generation of young women. And that Cannon certainly tries to do with an excess of female empowerment energy and a wealth of musical numbers, some good some bad, what magic is conjured up fizzles faster than Billy Porter’s fairy godmother can fly away.

You know the story, only…well, you don’t know the story. The titular poor peasant girl with the wicked stepmother (Idina Menzel) and self-absorbed stepsisters? She’s not some meek little girl living in their shadow; Cabello’s version, known as simply Ella (“Cinderella” is considered an insult) is witty, headstrong, and an aspiring fashion designer with dreams of owning her own business. Not an easy thing to do in the male-dominated kingdom she’s a subject of, where the peasant folk dance to the sounds of “Rhythm Nation” in-between shunning her entrepreneurial spirit.

There has to be a Prince Charming, of course, and he, too, is struggling with his life path. Prince Robert (Nicholas Galitzine) is considered a royal oaf by the townspeople and does little to dissuade this notion. He lives under the thumb of his father the king (Pierce Brosnan) and mother the queen (Minnie Driver), the latter clearly a woman who has kept her fiery nature at bay for the sake of the kingdom. Robert’s brainy sister Gwen (Tallulah Greive) is clearly more suitable an heir to the throne, but she’s a girl so nobody cares. As far as storybook meet cutes go, Robert discovering Ella after she fearlessly sits atop a statue of his grandfather is a nice touch.

Much of the story plays out as you expect, and despite some dazzling dance numbers choreographed by The Greatest Showman’s Ashley Wallen, the film feels like its running in place for a while. It’s not until the amazing Billy Porter shows up as fairy godmother Fab G that Cinderella briefly starts to shine. With a twinkle in his eye and a sassy wave of his magic wand, he steals the moment away from Cabello for the entirety of his all-too-brief stay. Of course, he’s there to conjure up a fabulous new dress for her to wear to the royal ball where Robert will choose his future bride. Ella’s trio of chatty mouse friends (James McAster, James Corden, Romesh Ranganathan) become chatty footmen obsessed with peeing out of their “front tails”(the humor is occasionally very weird and lowbrow), and who can forget those magic glass slippers, uncomfortable the way women’s footwear was meant to be. Magic be damned.

While the choreography is sweeping with the kinetic feel of In the Heights or Step Up, the song choices are a peculiar mix of popular favorites and Oscar-aspiring originals. A mash-up of “Rhythm Nation” and “You Gott Be” kicks things off on a high-note, but latter choices, such as a theatrical rendition of Salt-n-Pepa’s “Whatta Man” fall flat. Furthermore, Cabello is strangely excluded from being the centerpiece act, with the exception of the catchy original “Million to One” which you can tell is the song producers are hoping will sell a lot of soundtracks.

Cabello’s Ella is easy to cheer on, though, and her girl boss ambitions give Cinderella a Devil Wears Prada vibe that audiences will love. It’s just unfortunate that she has so little chemistry with Galitzine, whose Prince Robert is so bland for a movie that pushes diversity and inclusivity at every turn. I think it’s safe to say this is the most culturally colorful version of the story that we’ve seen on the big screen, possibly ever, wich makes having such a dull love interest more pronounced. Others fare much better. We’re (mostly) free from the horrendous Brosnan vocals we had to endure in Mamma Mia, but Driver reminds us that she’s got a set of pipes on her. The two veteran actors add another dimension to the story as their characters cope with a marriage that has crumbled under the weight of the king’s rule. It can make for an awkward mix of tones, but Cannon and her cast are mostly capable. Doc Brown really brings it as the town crier, who drops the hot news with some equally hot verses backed by a bangin’ drumline. His interludes, while only a few, keep the momentum up and always bring a smile.

If there’s any actual chemistry in Cinderella it’s between Cabello and Menzel. The latter’s wicked stepmother isn’t so wicked here; she’s been cast aside by men and their power-hungry ambitions the way so many women have. Predictably, Menzel builds a more layered character than the script offers, suggesting a richer story that we wish could have more screen time.

Cinderella can sometimes come across as a bigger-budgeted Disney Channel effort. The empowerment trappings are a bit flimsy (she’s still beholden to men at every turn), dolled up with youthful exuberance and lively musical acts. But this fairy tale has always been more brittle than a pair of glass slippers whose magic fades at midnight. All of the pop stars in the world isn’t going to change that.