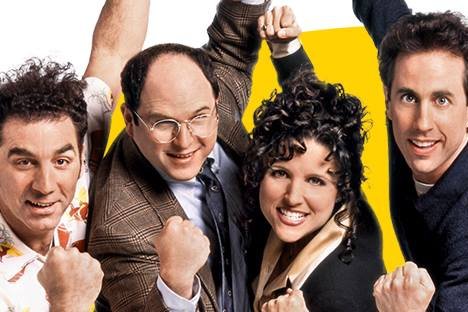 Whoa! Jerry Seinfeld has a new sitcom on Netflix! And look, they dig it so much they’ve already committed to nine whole seasons! And it starts in October? As a fan of Seinfeld I’m gonna…wait…this is the same show? The greatest sitcom of all time? Very funny, Netflix! You almost had me there.

Netflix’s teaser for Seinfeld pretends like it’s a brand new sitcom but obviously, no, it’s the classic show that Jerry Seinfeld, Julia Louis-Dreyfus, Jason Alexander, Michael Richards, and co-creator Larry David made must-see viewing in the ’90s. This is the streamer’s way of filling the gap left behind by The Office, which is no longer on their platform. Hey, if you ask me Seinfeld more than makes up the difference. Nothing else quite compares.

I’m biased, however. The infamous “show about nothing” rarely goes more than episode or two without an iconic moment (“Serenity now!!”) or an unforgettable character (The Soup Nazi!). Copycat shows would follow, each trying to make lovable characters who are, when you think about it, all entitled and pretty damned awful.

“Larry and I are enormously grateful to Netflix for taking this chance on us. It takes a lot of guts to trust two schmucks who literally had zero experience in television when we made this thing,” said Seinfeld. “We really got carried away, I guess. I didn’t realize we made so many of them. Hope to recoup god knows how many millions it must have taken to do. But worth all the work if people like it. Crazy project.”

Whether Seinfeld can tap into a younger audience the way other shows have I’m not so sure about. The cast is lily-white, the characters privileged and self-absorbed, and some of the humor is extremely dated. I would say to anyone who isn’t sure to watch a few episodes of the second season (skip season one where they’re still trying things out) and see if it clicks with you. As for me, I already own every episode on DVD but the ease of having it on in the background while working will be very tempting.

‘Unfrosted’: Pop-Tarts Movie In The Works From Jerry Seinfeld At Netflix