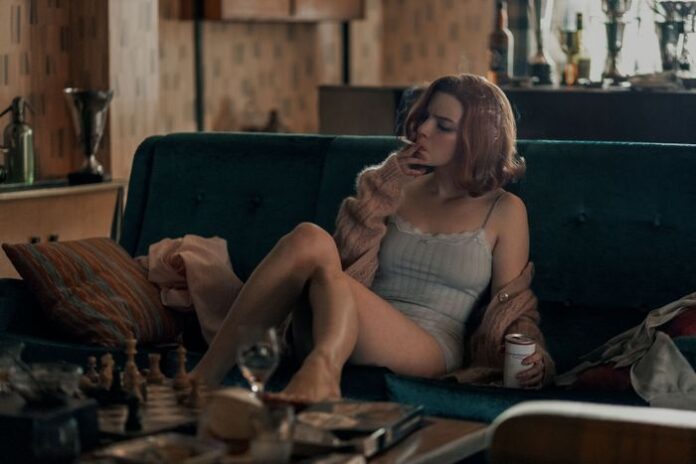 From The Witch to Thoroughbreds and even The New Mutants, Anya Taylor-Joy isn’t just one of the best actors around, she comes across as knowing exactly how good she is. That comes with a lot of pressure. For her character in the upcoming Netflix series The Queen’s Gambit, that pressure to be the world’s top chess player fuels her personal demons.

The Queen’s Gambit is the new series from Scott Frank, best known for his awesome Western Godless, and for his films The Lookout, The Wolverine, and Logan. Taylor-Joy plays an orphaned chess prodigy who struggles with additiction to drugs and booze during her quest to earn the rank of Grandmaster.

SYNOPSIS: Based on the novel by Walter Tevis, the Netflix limited series drama The Queen’s Gambit is a coming-of-age story that explores the true cost of genius. Abandoned and entrusted to a Kentucky orphanage in the late 1950s, a young Beth Harmon (Anya Taylor-Joy) discovers an astonishing talent for chess while developing an addiction to tranquilizers provided by the state as a sedative for the children. Haunted by her personal demons and fueled by a cocktail of narcotics and obsession, Beth transforms into an impressively skilled and glamorous outcast while determined to conquer the traditional boundaries established in the male-dominated world of competitive chess.