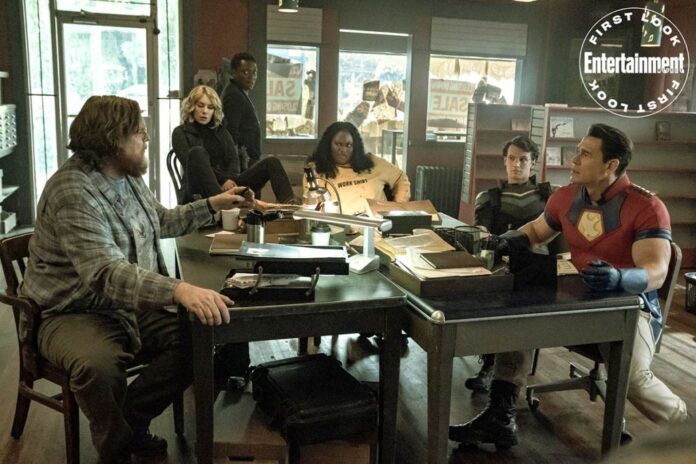 The Avengers can barely get along enough to prevent the end of the world, and they’re a bunch of boy scouts. So you just knew there’d be beef in The Suicide Squad‘s team of baddies. And we saw that play out, at first in comical fashion, between Idris Elba’s Bloodsport and John Cena’s Peacemaker. Then, their friendly but violent game of oneupmanship turned deadly in an epic showdown in the film’s final act, leaving Peacemaker seemingly for dead.

Of course, that wasn’t the case and we knew it probably wouldn’t be. James Gunn had already announced a Peacemaker spinoff series on HBO Max, with Cena back under the bucket helmet. EW has the first official photo from the show, featuring Cena’s Peacemaker, joined by returning The Suicide Squad actors Steve Agee as Economos and Jennifer Holland as Harcourt. You’ll recognize them as the two who betrayed Amanda Waller and are now paying a bit of penance for it. Also in the image is Danielle Brooks as Adebayo, a new character, Chukwudi Iwuji as squad leader Murn, and Freddie Stroma as popular C-list DC Comics character Vigilante.

Gunn talked about the way he kept Peacemaker around for the series, admitting that he used the “death fake-out” trope that has been overused, especially in the realm of comics…

“I did exactly the thing I hate when other filmmakers do [it],” said Gunn. “But I did it! I’ll have to live with the repercussions, which is the most incredible TV show people will ever see.”