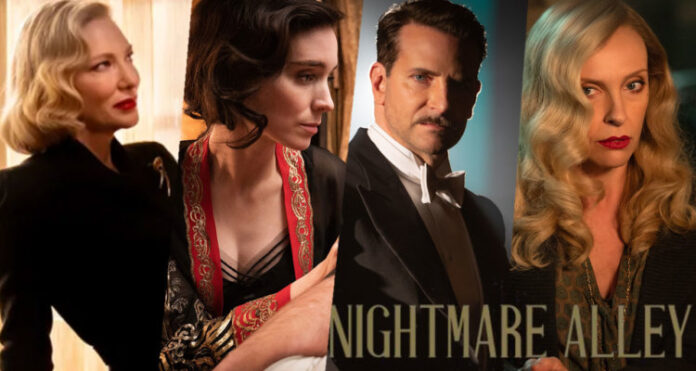 It’s funny that Guillermo Del Toro had to recently explain that his upcoming film noir Nightmare Alley is not a horror and that his fans shouldn’t expect it to be. The filmmaker has frequently ventured away from that genre, whether it was Pacific Rim or his Best Picture winner The Shape of Water. In this case, he’s still dealing with some nasty themes and cruel, manipulative people as terrible as any monster Del Toro could imagine.

Bradley Cooper, Cate Blanchett, Rooney Mara, Toni Collette, Willem Dafoe, Ron Perlman, Richard Jenkins, and David Strathairn are part of the all-star Nightmare Alley cast. The 1940s noir, based on a novel and previous film adaptation, centers on a manipulative and ambitious carny who joins with an psychiatrist who is even worse than he is.

Del Toro not only directed but co-wrote the script with journalist Kim Power. Alexandre Desplat did the music, while The Shape of Water cinematographer Dan Laustsen is back on the camera.