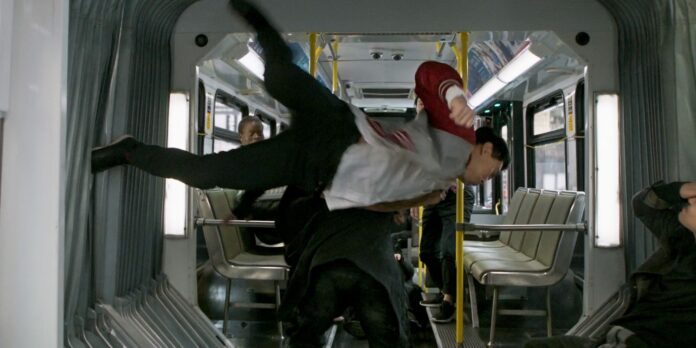 If you’ve noticed Shang-Chi and Jackie Chan trending on Twitter all weekend, it’s for a reason. A new clip from Shang-Chi and the Legend of the Ten Rings dropped that features star Simu Liu pulling off the kind of acrobatic stuntwork aboard a movie bus that easily draws comparisons to Jackie Chan’s insane stuff. In particular, a moment where he puts on his jacket mid-fight is getting a ton of attention, as it should.

Having seen the film and able to comment (review next week), I can say that it’s just the beginning. The martial arts action here is on a Crouching Tiger level in some cases, while the film feels so far removed from Marvel in all of the best ways, showing a mystical side that that puts in the Doctor Strange realm. It stands on its own, even if there are things to pick at about it.

Along with the clip, Marvel Studios has released a new trailer for the film ahead of its release on September 3rd. Check that out below as well.

In less than two weeks, a Marvel Legend will rise. 💪 Experience Marvel Studios’ #ShangChi and the Legend of the Ten Rings in theaters September 3. Get tickets now: https://t.co/tf8v3iFOeg