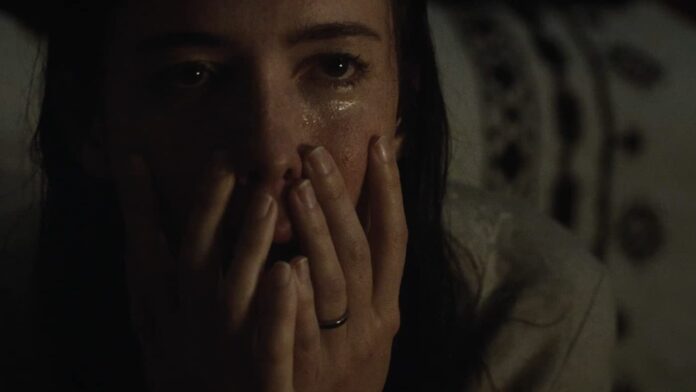 Ghost stories, more specifically haunted house stories, are a dime a dozen, but David Bruckner’s The Night House is a rare breed. Led by a captivating performance by Rebecca Hall, it’s a film that keeps its feet firmly planted on emotional ground while still proving to be a chilling, atmospheric thriller with plenty of scares and demons, both literal and otherwise.

Like so many indie horrors of late, The Night House deals with grief and the process of getting beyond it. While that might make this sound overly familiar, it’s the central character Beth, and Hall’s portrayal of her, that separate it from the norm. Beth is coping from the sudden suicide of her husband of 14 years, Owen (Evan Jonigkeit), which has taken her completely by surprise. But getting past it proves difficult for many reasons, not the least of which is that she continues to live in the lakeside home that he built with his own hands. It’s the type of place that horror movies have made famous: quiet, isolated, overly large, shadowy, creeks at just the right places, the wind chimes jingle at the worst time. It’s a home practically designed for a lonely, grieving wife to have nightmarish visions in, and Beth definitely does. As she rummages through the remnants of her life with Owen, unearthing secrets that perhaps should have left buried, Beth begins to suspect that an unnatural force has taken up residence in the home. Could it be Owen? Or something worse?

Beth is such a fascinating character to follow through her grieving process, and reminded me favorably to the lead character in The Babadook. While many women in these films are passive observers or victims, Beth is rough around the edges and doesn’t have time for people’s bullshit.  There’s a great scene early on when Beth, who is a high school teacher, encounters one of those privileged parents who wants to complain about their kid’s grade. But coming off her much more serious tragedy than some student’s “C” in class, Beth drops a massive, much-deserved guilt bomb on the woman to hilarious effect. Later, at a Happy Hour with some colleagues Beth plays along with their insensitive requests for information on her husband’s death, and gives them a lot more than they bargained for.  She is nobody’s shrinking violet, but has moments of openness with her best friend Claire (a terrific Sarah Goldberg) and neighbor Mel (Vondie Curtis-Hall) who look out for her best interests but are obviously skeptical. The supporting cast around Hall is small, but really strong.

In private, Beth is always on the edge of either a breakdown or an explosion. Each new revelation about Owen and a secret life she knew nothing about sends her careening, to the point where we begin to wonder if the things she’s experiencing are real or figments of her broken mental state. Bruckner, along with screenwriters Ben Collins and Luke Piotrowski, give Beth plenty to occupy her mind with. There’s Owen’s mysteriously vague suicide note, and photos of other women that suggest something about her marriage that she doesn’t want to think about. Should she continue to explore it, and change her perception of the man she loved for so long? Or let it go and hold on to that idea of him? This being a horror movie you probably know what her choice is, but watching Beth grapple with it is heavy stuff. She must also contend with her own beliefs, forged by an earlier brush with death. Beth and Owen often argued about the afterlife, but now everything she’s denied is staring her right in the face. She’s just such a wonderfully complex character and Hall, whose face can often be an inscrutable mask, is perfect for the part.

While this is definitely meant to play on the psyche, The Night House isn’t without its share of jump-out-of-your-seat frights. And these aren’t cheap scares, either, where your terror (and Beth’s) prove to be completely unfounded. They’re substantial, often emanating from the darkest recesses of the house itself. DP Elisha Christian finds something ominous in every nook, cranny, and shadow. It’s a perfect contrast to the structural beauty she found in the delicious architecture of Columbus, and basically I want her to shoot every movie primarily set in and around this motif.

At nearly two hours, The Night House can’t fully escape  the feeling it could’ve been edited down. The final act steers into convention the way so many of these films do, because the explanation is never as exciting as the mystery and at some point a decision must be made how far to go with it. Bruckner wisely leaves some room for ambiguity while focusing on the human connections that keep us moored in this life.