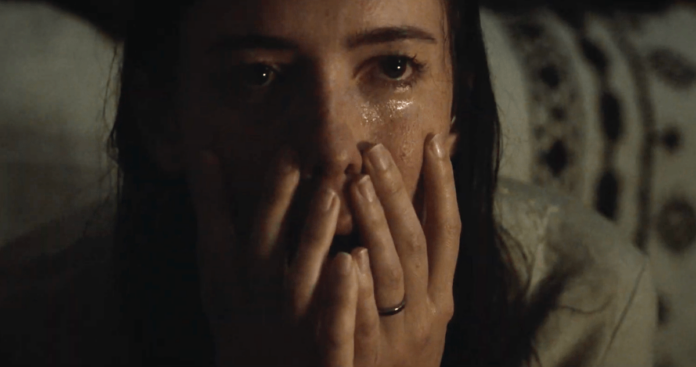 The last couple of Sundance Film Festivals has been very busy for Rebecca Hall. This year she dropped her directorial debut with the acclaimed drama Passing, but it was last year that she starred in the buzz-worthy horror, The Night House. And finally, after more than a year of wait, Searchlight Pictures are set to release the film next month, but not before a new trailer takes us into the titular haunted lake home.

In The Night House, Hall stars as a woman struggling with the death of her husband, while staying in the lakeside house he built for her. It’s there that she begins to unearth secrets about the man she thought she knew, while experiencing dark visions and a mysterious presence.

It’s familiar ground, to be sure, but we should expect a little somethign different from director David Bruckner. He’s quickly risen up the ranks as a genre favorite thanks to his 2007 film The Signal, his “Amateur Night” segment in V/H/S, and the underrated horror The Ritual.

Reeling from the unexpected death of her husband, Beth (Rebecca Hall) is left alone in the lakeside home he built for her. She tries as best she can to keep together—but then the dreams come. Disturbing visions of a presence in the house call to her, beckoning with a ghostly allure. Against the advice of her friends, she begins digging into her husband’s belongings, yearning for answers. What she finds are secrets both strange and terrible and a mystery she’s determined to resolve.