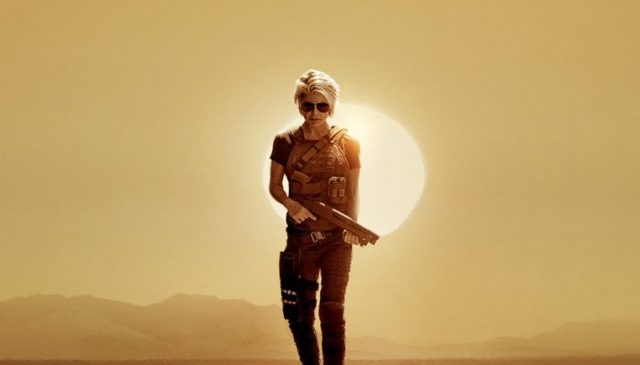 Comic-Con kicked off its day of Hall H presentations in suitably huge fashion with Paramount’s Terminator: Dark Fate panel! While he wasn’t there in attendance, James Cameron started things off live from the set of Avatar 2, revealing that he came into the production later and has given director Tim Miller free room to play without interference.

Miller then came out, and between a litany of F-bombs he revealed that Edward Furlong, who last played John Connor in 1991’s Terminator 2: Judgment Day, would be returning to the role. He’s mostly stayed out of the Hollywood limelight ever since, but his return feels right considering Linda Hamilton’s comeback as Sarah Connor.  Sadly, no confirmation that Danny Cooksey would also be back. Whomp whomp.
There were some serious Hollywood heavyweights on stage when Hamilton and Arnold Schwarzenegger took the stage, along with stars Mackenzie Davis, Diego Boneta,Gabriel Reyes, and Natalia Reyes. Miller confirmed, albeit hesitantly, that the film will indeed be R-rated, saying that it was the fans who demanded it be that way.
Miller said what made this Terminator different is that it deals directly with Sarah Connor’s actions at the end of T2, and her ultimate decision to destroy Cyberdyne. Because this franchise deals with the actual impacts of changing the timeline, unlike Avengers: Endgame which just branches off alternate realities, we get to see the consequences of her choice. Clearly, based on the 27 years of battling Terminators she’s had, the results were not as she expected.
New footage was the film was revealed and, while awesome, I think it showed way too much that probably should’ve been kept a secret. It begins with an extended look at the freeway chase scene, with Davis’ character battling Luna’s, who has the power to create liquid metal duplicates of himself. Just as the trio of humans are about to be overtaken, Sarah Connor literally comes barrelling in and blasts the Terminators into oblivion. After casually dropping a grenade on top of Luna’s character, she hits us with an “I’ll be back”, which got a roar of applause from the crowd.
The footage also gave us a different look at Schwarzenegger, back as the T-800. His relationship with Sarah is more adversarial than has been shown in previous promos, and she promises to kill him when this whole thing is over.
Pretty badass stuff, and the crowd loved it, demanding they show the trailer again. After some delay, Miller came out, grabbed the mic and said “You better show that fucking trailer again”, to which Comic-Con quickly obliged.

Now check out the awesome new featurette that Cameron introduced below!