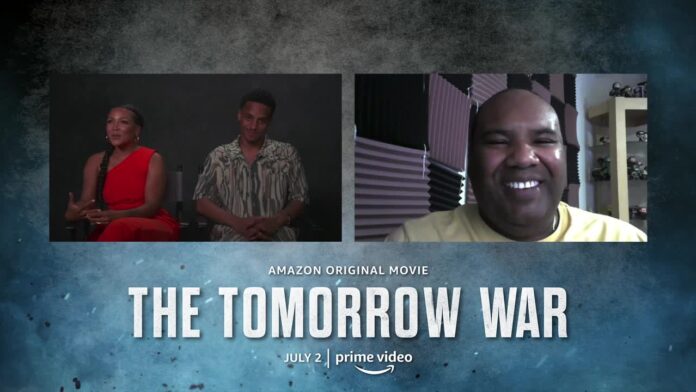 Available on Amazon Prime Video right now is The Tomorrow War, a blockbuster sci-fi film starring Chris Pratt as a man drafted to travel into the future to fight a losing battle against a deadly alien race. Many of those enlisted have no idea what they’re in for, and have even less experience on the battlefield, but the same can’t be said for the characters played by actors Keith Powers and Jasmine Matthews.

Powers plays Major Greenwood, with Matthews as Lt. Hart, both experienced soldiers in combating the extraterrestrial threat. It’s up to them to get the new recruits mentally and physically ready for the fight of their lives, while keeping their own fears in check.

I had a chance to talk with Powers and Matthews about starring in The Tomorrow War. Similar to my earlier conversation with Chris Pratt and Edwin Hodge, we talked about the physicality demanded from the intense shoot, their thoughts on the creature design, and more.

Check out my review of The Tomorrow War here and the interview below!