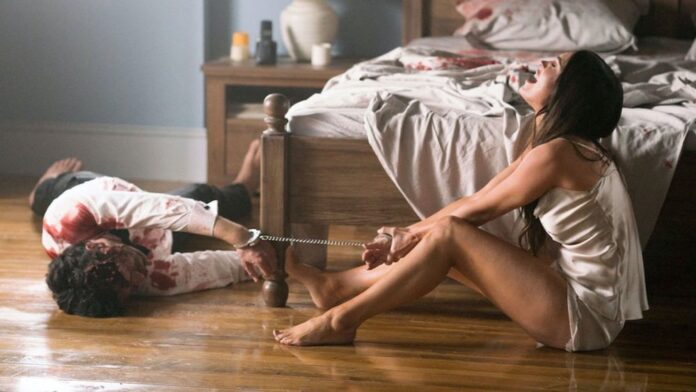 Many people have figured out their relationships were toxic while being stuck with their partner during COVID quarantine. The new film Till Death takes that concept of being stuck in a bad marriage to a whole new level. Starring Megan Fox, Callan Murphy, Eoin Macken, Jack Roth, and Aml Ameen, this sleek slasher thriller has the potential to be a sleeper hit like Ready Or Not but is ultimately weighed down by a lacking script written by Jason Carvey.

Emma (Megan Fox) is stuck in a loveless marriage with Mark, an intimidating and skeevy lawyer. Clearly emotionally abusive, her husband takes her to their lake house in the middle of winter for their 10th anniversary. After the facade of resolving their marriage wears off, Emma literally wakes to find herself handcuffed to her soon-to-be-dead husband. Caked in his blood, Emma tries to escape when two criminal brothers break in to steal diamonds locked in a safe. One brother just so happens to be Emma’s attacker a robbery gone wrong 11 years before. Forced to free herself from the physical and mental chains of her marriage, Emma is pushed to her limit trying to survive.

From the opening shot, Till Death takes itself too seriously. The overhead tracking shot of a foggy New York City quickly turns into water droplets rolling off the window of a car. The film’s first lines share this same sentiment. “Everything looks so beautiful from up here.” The lines that follow are often quippy and hollow. The lack of chemistry between the cast makes the dialogue feel hokey and performances wooden.

As baddies, Callan Murphy and Jack Roth probably have the most stable performances out of the entire cast (though it is Fox’s movie). Roth’s Jimmy, the reluctant brother who is clearly in over his head, doesn’t feel like the bumbling criminal archetype like he could have been. Instead, his tiny character arch of realizing how far gone his brother is one of the script’s few redeeming qualities and Roth does a stellar job taking those moments when he can.

Adding to the script’s problem is that Fox’s Emma feels completely underwritten. We know she was in a crappy marriage, had an affair, was once a photographer, and was brutally attacked long before the start of the movie. But at Till Death’s start, Fox isn’t given much of a character to start with besides a depressed miserable woman stuck in a loveless marriage. However, once the action picks up at the lake house, Fox makes interesting and moving choices that not only endear the audience to her but moves the story along.

While the script is trite and dialogue cliche, the plot doesn’t drag at all. Part of this is due to Fox’s aforementioned performance and some smart directing choices. Director S.K. Dale builds tension pretty seamlessly and makes some interesting visual choices along the way, adding to the setting’s starkness. Like Fox’s performance, Dale’s directing improves over time and shines brightest in Till Death’s final 35 minutes.

A cross between Gerald’s Game and a domestic abuse version of Home Alone, Till Death tries to be a biting thriller when in reality its script transforms into something void and hollow. With an absurd premise like hating your spouse so much, you die, you’d think the film would have more of a sense of humor.

You can catch Till Death on demand and in theaters. Watch the trailer below.