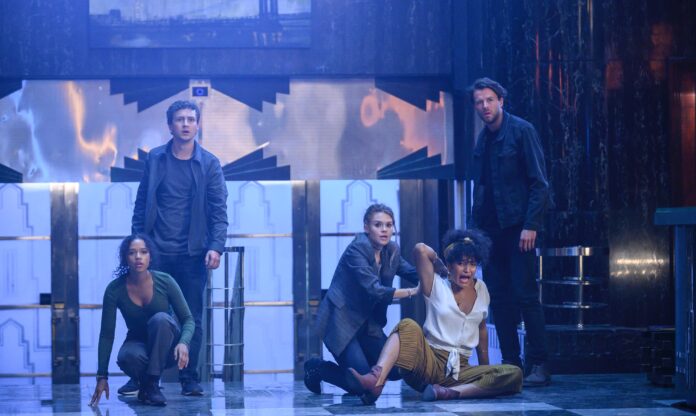 I’m quite a big fan of escape rooms. The fun of them, of course, is figuring out the puzzles with your friends, seeing who rises to the challenge when under pressure and seeing who folds like a deck of cards. The first Escape Room in 2019 captured this sensation perfectly, crafting killer traps that allowed the audience to feel like they were in on the problem-solving themselves. Rooms were designed with characters in mind, giving the viewer someone they could at least try to identify with. The sequel, Escape Room: Tournament of Champions, continues the Saw-meets-Hostel premise of the original but also takes on the worst aspects of those films, becoming a straight-forward horror that ignores the personality that made the first movie so much fun.

As the title suggests, Escape Room: Tournament of Champions finds survivors of previous games returning to survive another maze of deadly puzzles. The charming Taylor Russell is back as Zoey, who is the only player to help another live through the game. Ben (Logan Miller), who has stayed loyal to her ever since, wants to move on from Minos, the evil company that crafted the escape rooms, but Zoey is insistent they confront them at their New York headquarters. Of course, this was all a lure to bait them into another series of games of death.

There’s quite a lot about Escape Room: Tournament of Champions that works, and you’ll be unsurprised to learn the best are the rooms themselves. But also the premise negates a lot of the convoluted nonsense of the first movie and others like it, where characters spend half the time wondering what’s going on. Almost immediately, Zoe and Ben know they’ve fallen into another of Minos’ schemes, while the others aboard the electrified subway car they’re in also know what’s up. It only takes a few moments of angry realization before they all start springing into action to find the clues to move on to the next room. Of course, it’s not that simple and failure leads to shocking repercussions.

The downside is that the other players don’t get much of an introduction, either. We barely even know their names. One was a travel blogger who somehow managed to survive her game, while another is a Catholic priest with a hero complex, while a third player has absolutely no traits at all except she doesn’t feel pain. At one point she remarks about the kind of inventive traps Minos would design for someone like her, but we don’t see it. Another finds the priest deciding to trust in his faith and ignore the clues, stomping across a booby-trapped floor that sets off a laser grid with each misstep. It’s a cool moment that momentarily gives a character some agency, but it would’ve been better if there were more displays for these supposed champions. They’re all past winners, but rarely get a chance to show why they’re special.

Although the clues aren’t nearly as thought-provoking this time around, the rooms themselves are just as tense and exciting, with the clock always winding down to the last second. Those final moments, when someone is either doomed to die or on the verge of freedom, are truly pulse-pounding and the heart of what continues to make the Escape Room movies enjoyable. Returning director Adam Robitel keeps the pacing brisk (the runtime is only 88 minutes), moving the competitors from deathtrap to deathtrap with barely time to catch a breath. The overall Minos plot lurches forward by making them appear way too powerful and all-encompassing, inviting you to consider just how ridiculous the whole thing is.  Escape Room is best when you’re only thinking about the next clue to be solved, not the machinations of plot. If the franchise continues, ditching some of the excess baggage might be the smart way to play.

Escape Room: Tournament of Champions is in theaters now.