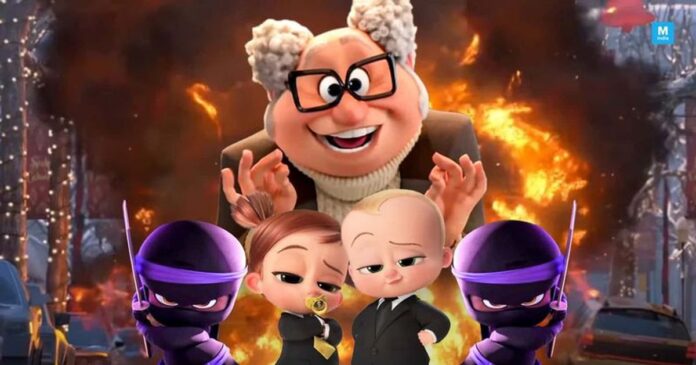 Universal is doing their part to get the movie theater business rolling again with the release of F9 later this month, but let’s not forget the other hit franchise on the way. The Boss Baby: Family Business is the anticipated (???) sequel to 2017’s The Boss Baby, which made over $500M from folks who really want to hear Alec Baldwin voice a talking infant.

The sequel introduces a brand new boss baby, who is actually a super-spy, while Baldwin’s character is now an adult. Huh? Y’got me. The synopsis can explain this better than I ever could.

Tim (James Marsden) and his Boss Baby little bro Ted (Alec Baldwin) – have become adults and drifted away from each other. Tim is now a married dad. Ted is a hedge fund CEO. But a new boss baby with a cutting-edge approach and a can-do attitude is about to bring them together again … and inspire a new family business. Tim and his super-mom wife Carol (Eva Longoria) live in the suburbs with their super-smart 7-year-old daughter Tabitha (Ariana Greenblatt), and super-cute new infant Tina (Amy Sedaris). Tabitha, who’s at the top of her class at the prestigious Acorn Center for Advanced Childhood, idolizes her Uncle Ted and wants to become like him, but Tim worries that she’s working too hard and is missing out on a normal childhood. When baby Tina reveals that she’s—ta-da!—a top-secret agent for BabyCorp on a mission to uncover the dark secrets behind Tabitha’s school and its mysterious founder, Dr. Erwin Armstrong (Jeff Goldblum), it will reunite the Templeton brothers in unexpected ways, leading them to re-evaluate the meaning of family and discover what truly matters.

Jimmy Kimmel and Lisa Kudrow also return to lend their voices. Tom McGrath is back behind the camera, as well.

The Boss Baby has launched an empire that the Boss Baby himself could appreciate. Beyond this sequel, there was also a Netflix special and television series that is in its fourth season. Apparently, people want more and they’re getting it.