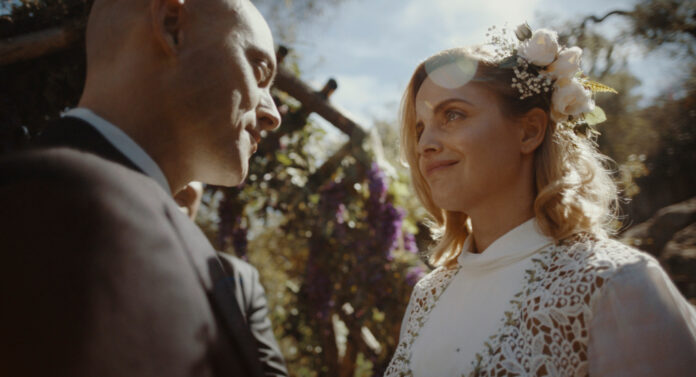 Grace and Grit is the true love story of iconic philosopher Ken Wilber (Stuart Townsend, Salem) and his wife Treya (Mena Suvari, American Horror Story). They meet in sunny California during the early start of the 1980’s and instantly fall madly in love. A few days after their wedding they receive some bad news.  Ken and Treya now face an unexpected illness that challenges and threatens to tear them apart. This film is based on the 1991 book by Ken Wilber that chronicles the journey of his wife’s breast cancer and how they got through it together. Ken and Treya endure a five-year battle of conventional to alternative treatments, a tug-o-war of physical and mental emotions, and the turmoil it takes on their relationship.

Grace and Grit is written and directed by British-American filmmaker, Sebastian Spiegel and produced alongside Eric Brenner and Lucas Jarach. Ken (Townsend) and Treya (Suvari) are not alone and have the love and support from family and friends played by the great supporting cast of Frances Fisher, Mariel Hemingway, Rebekah Graf, Nick Stahl, and Brian McGovern.

The cinematography for Grace and Grit is fabulous. Sebastian Spiegel does an excellent job of being respectful to Ken and Treya’s predicament but also elegantly captures the emotional whirlwind of it all. There’s a great use of camera angles and shots that makes you feel like you’re there with each of the characters. A beautiful display of artistic imagery that connects the film to the memoir of a philosopher and the unfortunate death of his wife. It gives heartbreaking insight of Treya (Suvari) going through conflicting phases as the disease takes over her body and Ken (Townsend) often finds himself in moments of detriment and suffocation. Despite the hardships, they are both determined to fulfill the love they promised each other. Their eternal vow reminds me of the 2006 film, ‘The Fountain’. Another good love story with similarly unique cinematography that just so happens to be one of my personal favorites.

Grace and Grit is set in the early 1980’s but does not reflect an 80’s vibe at all. The color scheme and background set have practically a modern feel. Objects like touch dial and payphones to photo albums were used to fit the period but felt placed. The hair, wardrobe, and even the furniture resemble more closely to today’s style. Those bit of details are really peanuts compared to the wonderful execution of performance and creative emotional imagery but admittedly, are off-putting. Nevertheless, be prepared for a hard-hitting and in-depth truth that still affects many women and some men to this day. Grab a box of tissues!

Grace and Grit opens in select theaters, on Digital, and On-Demand, June 4th.