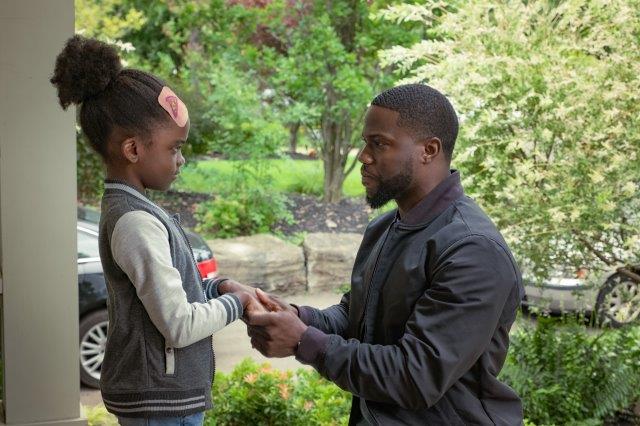 Kevin Hart is sometimes an acquired taste. In most (just about all) of his film, he plays the short wisecracking sidekick (usually to The Rock). His loudness and self-deprecating short jokes seem to work for the audience he’s crafted for himself. Between that and his standup shows, he’s made a lucrative career with that angle. However, in his latest film Fatherhood, he’s actually stretching his range to veer towards the dramatic side. Much like he did in The Upside, he showcases that like countless comedians before him (Eddie Murphy, Jim Carrey, Robin Williams, Bill Murry, etc.), he joins the club of funny guys giving great performances in Fatherhood.

Based on the real-life 2011 blog and memoir Two Kisses for Maddy: A Memoir of Loss and Love by Matthew Logelin, Hart is Matthew: who is having the time of his life. He’s a successful businessman, madly in love with his wife Liz (Deborah Ayorinde), and the couple is expecting their first child. On the day of delivery, the greatest thing and the worst thing happen on the same day. Maddy gives birth to their baby Liz, but unfortunately, she suffers a fatal blood clot and dies shortly afterward. Now Matthew who self-admittedly doesn’t know a thing about raising a baby. In addition, with dealing with depression, now has to find a way to mourn for his wife, and press on and raise his daughter on his own.

While he’s on his own, he does have a good support system helping him through this turmoil. His mother-in-law Marian (Alfre Woodard) and his mother Anna (Thedra Porter) are eager to provide assistance. But they both think that he should leave his home of Boston and move back to Minnesota. Matthew rejects this and starts to tackle the idea of being a single dad. Of course, we get the usual baby jokes: the restless nights, the can’t do a diaper properly jokes, and everything in between. Matthew also has his equally immature friends Jordan (Lil Rel Howery) and Oscar (Anthony Carrigan) who help provide support and friendship with him, and they also help him as they all learn the ropes together. Matthew also has an equally understanding boss at work Paul (Paul Reiser), who lets him take his newborn to work with him. Hell, even his clients help him take care of the baby as he gives sales pitches to them.

As time continues, Matthew is getting the hang of things. Baby Maddy grows up into a young girl (played by young actress Melody Hurd), and while Matthew gives the idea that rules can be broken (which doesn’t go over well at her catholic school when she wants to wear pants instead of a skirt, he’s very successful in raising a healthy young girl. Even though Liz holds a special place in his heart, he does take a stab at dating and meets the ironically named Liz (DeWanda Wise), who he calls “Swan,” and he tries to now juggle a demanding corporate job, his daughter, and now a new girlfriend. Some dramatic things arise and Matthew hits a crossroad about what to do best for Maddy. Does he want to move up the corporate ladder and be traveling to other countries, or does he want to terribly braid his daughter’s hair?

As stated before, this type of role is normally not in Hart’s wheelhouse, but he sparingly is very good in Fatherhood. He’s funny when he needs to be, but he’s very dramatic for the bulk of the film. In fact, he often plays the straight man to Lil Rel Howery and Anthony Carrigan’s antics throughout the film. There are a few moments where he successfully cries on cue at the right exact moment throughout the film. Melody Hurd as young Maddy also does a great job as a young girl full of love and hope in her father, but at the same time expresses the pain of never knowing her mother as she sees friends getting love and adulation from their mothers. Alfre Woodard is also great as his mother-in-law who wants to do what’s best for her granddaughter, but it’s clear she also is suffering from the loss of her child. Director Paul Weitz also does a great job. The opening of the film showcasing the miracle of birth intercut with Liz’s funeral helps set the serious tone from the beginning of the film, and fully engages the audience onward.

While the original Matthew Logelin is a white man, the casting of Hart (with Logelin’s approval of the race-swapping) is an interesting choice. Originally a Channing Tatum role, Kevin Hart allows the movie to have a somewhat different view of the story. While nothing in the story is race-specific in the film, it does have what would be assumed as a different cultural approach in Fatherhood. It also shows how love, loss, and fatherhood is a universal story that isn’t tied to any one race. In a world where the media often comments on fatherless black children, showcasing Hart and a devoted black man doing everything he can to take care and love his child is a refreshing image to showcase. No wonder the Obamas and their Higher Ground Productions (they really do like telling interesting stories in their movies) opted to produce this film.

While Fatherhood doesn’t have the most complex plot as it’s fairly predictable, it does accomplish in making a sweet film that tells a great story about the importance of stepping up and doing everything you can to raise your child the right way. To ensure they have everything possible to be loved and lead a successful life. And isn’t that what fatherhood’s all about?