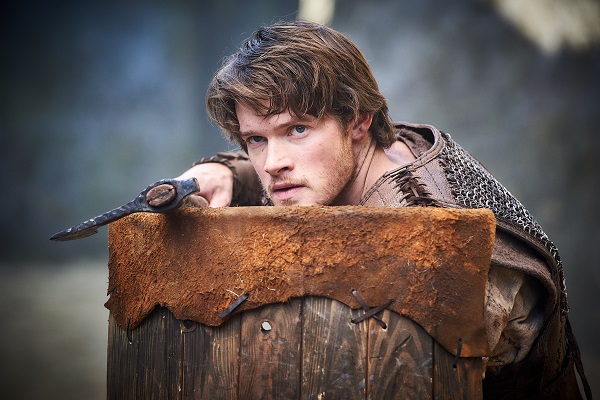 In 1883, Ukrainian author/poet Ivan Franco wrote the historical fiction “Zakhar Berkut” based on the life of the titular character who was a 90-year-old warrior, who after trying to live a life of peace and tranquility, was forced to led an army against in defense of an invading army of from Mongolia. While the story has been cited for its historical inaccuracies, it still proved to be a source of nationalistic pride for some Ukrainians. Because of the epic-ness of the story, it seems almost ripe for some sort of film adaptation. Ukraine, who normally doesn’t produce many films (usually small dramas, not a blockbuster action flick) partnered with US Based production company CinemaDay to produce The Rising Hawk with a cast of mostly American and British actors.

Set in the 13th Century, Zakhar Berkut (Robert Patrick) and his wife Rada (Alison Doody) lead a village of people in the Carpathian Mountains along with his sons Maksim (Alex MacNicoll) and Ivan (Rocky Meyers). They live a peaceful and tranquil life where they hunt and gather, not necessarily bothering anyone, but that doesn’t mean that trouble doesn’t eventually come and find them. Burunda Khan (Tserenbold Tsegmid), a powerful Mongolian general has been sending his armies westward in search of new lands to conquer and annex, and their village is next on his list.

Realizing that their village will not be enough to ward off a strong invading army, Zakhar tasks his sons for an audience with the leader of a nearby village Tugar (Robert Flanagan) to galvanize an alliance and some support. In the process of trying to engage in some politics, Maksim meets Tugar’s daughter Myroslava (Poppy Drayton) while helping save her from a giant bear, and the two young leaders of their respective villages immediately have a connection. However, Tugar looks down on the other village and is reluctant for a partnership. After a very interesting trial by combat (in which Maksim bests Tugar’s champion), the two settlements decide to work together to protect their lands.

In the aftermath, there is a great deal of strategy and swordplay between the two respective armies. Of course, in the game of war, not everything is as it seems. Alliances change (and change again) various times through The Rising Hawk as tensions grow high on all sides to bring an end of the conflict. After the death of his son, Khan becomes hell-bent on not only destroying the Carpathians, but he specifically wants to torture and kill Maksim. While the story is based on centers on Zakhar Berkut, The Rising Hawk’s lead protagonist is Maksym and even though actor Alex MacNicoll receives third-billing behind Patrick and Flanagan, this is very much his movie and he carries it well.

You can tell that this film is greatly influenced by Braveheart and 300, and not only are story beats/plot points are almost copy and pasted from those films. There are certain deaths of key characters and betrayals that make you wonder if they owe a producer credit to Mel Gibson and Randall Wallace as well as a battle that literally takes place in a valley with the same military strategy that happened in 300. The CGI for the film also is not that great. There is a scene where there is a fight with an unrealistically oversized bear that doesn’t look very convincing. I know not everything can capture the perfection of the bear fight scene from The Revenant, but this needed a few more hands to get involved to correct it.  There may be some bothered by the “otherness” of the Mongolian army as it can be interpreted as a “heroic whites defending themselves from the evil Asians” troupe of films past, but this also is semi-historical, so this kind of gets a faux pass.

However, what The Rising Hawk doesn’t have in creative story points, it absolutely makes up in fight choreography. It’s clear most of the budget went to the fight training as the film perfectly films its swordplay scenes. The directing and editing during the battles is crisp, clear, full of tension, and greatly engaging. The large-scale CGI shots display clashing armies very well, and the close-up and intimate fighting scenes work incredibly well. The final battle especially is quite effective. Unfortunately, a film like The Rising Hawk cannot function just on action alone. Had this had a tighter or more unique script, it probably would have worked as a better film.

The Rising Hawk is currently available on VOD.