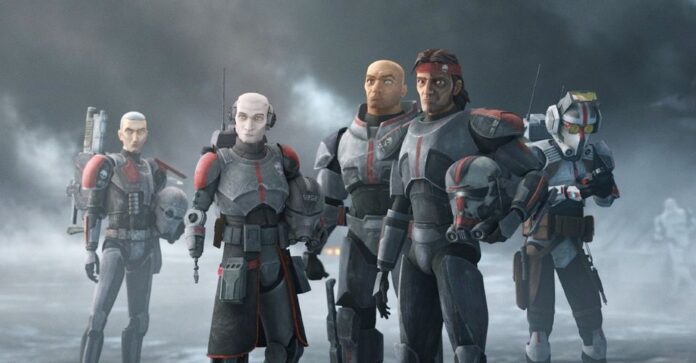 Going into Star Wars: The Bad Batch, which debuts today on Disney+, on Star Wars Day no less, I had little hope it’d be something for me. Havind debuted recently in the final “season” of The Clone Wars, the soldiers of Clone Force 99 have unique quirks that make them different from the others, but also make them feel like an odd fit for Star Wars. To say the least, I was wary this handful of oddballs could keep my attention for the long haul, and that concern does somewhat exist. But for now you can count me in to see where this goes, because Dave Filoni and Dee Bradley Baker are exploring some aspects of being a clone that we’ve never seen before.

The first episode of The Bad Batch, titled “Aftermath” immediately captures the feel of The Clone Wars, one of the most beloved Star Wars projects ever. The familiar propaganda voiceover by Tom Kane takes us back into the conflict, as the Republic engages in battle with a separatist droid army on Kaller. It’s here that Jedi Master Depa Billaba eagerly awaits the return of her padawan, Caleb Dume, who is returning with reinforcements. If the name and voice of Dume sound familiar, it’s because he grows up to be one of the most popular recent Jedi, Kanan Jarrus, recognized from Star Wars Rebels.  When he does return, it’s with just five troopers, the officers of Clone Force 99, who promptly wreck the droid army with ease.

The Bad Batch hits me right in my sweet spot with what comes next. I have a real fondness for the impact of Order 66, which is when the newly-christened Emperor Palpatine orders the clone troopers to turn on the Jedi and wipe them out. Most of the Jedi die in this period, and what The Bad Batch does is insert Clone Force 99 into it where they never were before. Immediately after their victory, the Order is made; we see Billaba realize that something is wrong and hold out just long enough to send Caleb away before she is gunned down.

What happens to Clone Force 99 after Order 66 was issued? Unlike the other clones who are all following set programming, they are equipped with genetic mutations that give them individual personality, skills, and tactics. The team, consisting of leader Hunter, Wrecker, Crosshair, Tech, and the recently-added Echo, operate on their own free from outside influence. So they aren’t affected by Palpatine’s commands; not that Caleb believes them. Hunter tries to help the boy flee, but Crosshair wants to follow orders and tries to shoot the kid. Hunter stuns the kid and lies to the other troopers that he died; a lie that nobody believes.

This is an interesting prospect, to explore what happens to the clone army when the paradigm has been shifted so radically. No longer a Republic, they now serve the Galactic Empire and their targets are humans. Not just Jedi, who can defend themselves, but Separatists, rebels, or whatever innocents Palpatine wants disposed of. “I don’t like to think of executing our commanders as a mission objective,” Hunter says.  But it’s more than that. Their individuality, which had been such a benefit to the Republic, is now potentially a problem for the Empire who want slavish devotion. When Moff Tarkin arrives on the home planet Kamino and assesses exactly this issue, he puts Clone Force 99 to a battle test, equipping the droids with live ammo rather than training fire. Wrecker almost dies, but they get through it by being able to formulate an unpredictable strategy, something normal clones can’t do.

It doesn’t take long for Hunter and the others to figure out that Tarkin has it in for them. And when he sends them to Onderon to take out a band of insurgents, they learn that it’s a human resistance led by Saw Gerrera (that guy really gets around), who have refused to fight for the Empire. That’s why Tarkin has targeted them. Saw schools the team up about Tarkin’s true plans, and lets them know they can either adapt to the new reality or die with the past.

This causes conflict within the group as Crosshair thinks they should continue following orders. The question that lingers is whether he’s succumbing to his programming, or if this is just who he truly is? Having been spotted by a probe droid, they know Tarkin is aware of what just happened. Sure enough, when they return back to base, Tarkin has them arrested for refusing to kill the insurgents.

One aspect that I’ve left out has to do with Omega, a mysterious young girl working alongside the Kaminoan scientists. It’s clear that the Kaminoans, who invented and perfected the clone technology, see some importance in her. Omega has taken a liking to Clone Force 99, almost in a fangirl kind of way. Hunter wants her to stay away from them, but she insists, seeing in them kindred spirits. We come to learn from Tech that Omega is a clone herself, making her the first female clone that we are aware of. But there’s also something else about her, too, as if she’s been gifted some special traits of her own.

It’s because of Omega and Wrecker the team is able to escape their imprisonment, but they run into Crosshair who has had his inhibitor chip “intensified”, whatever that means. Now more loyal to the Empire than ever, he refuses to go with the team to J-19, where Hunter says he knows an old friend who can help.

At least for now, my fears about The Bad Batch are quieted. The animated, which is closer in style to Star Wars Rebels, is beautifully detailed while still having some of the extreme aspects that make animation fun to look at. I’m intrigued by Omega, as well, who I think could become an important character in Star Wars lore. I have a feeling, call it a hunch, that she’s going to be revealed as someone we know as an adult. Most importantly, they’ve done a good job of making me interested in Clone Force 99, who are no longer one-dimensional characters whose names described their personalities. What they evolve into has me very curious.

I’ve already seen episode 2 and will have a recap of that in a few days, as well. Not sure I’ll stick with doing these for the entire season. Probably depends on my interest level! Happy Star Wars Day!