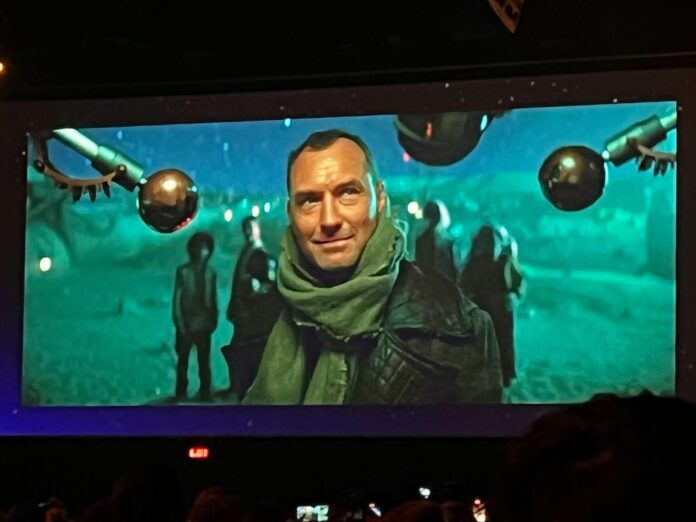 And someone told me early this morning that today would be a light day for Lucasfilm at D23. Not so much. A couple more items to drop at the presentation are our first official look at Skeleton Crew, the Jon Watts-directed coming-of-age adventure series. We also learned when to expect the second season of the popular Star Wars animated series, The Bad Batch, and sadly it’s a bit later than originally thought.

But first, the debut image from Skeleton Crew reveals the only confirmed star, Jude Law. He looks quite giddy staring at some alien gizmo, although I would say there’s something mischievious, possibly villainous, behind that smile. Behind Law you can see outlines of the kids who are lost and trying to find their way home in this deadly universe. Law is the only confirmed casting, hence the reason we can’t see who the child actors are just yet.

Skeleton Crew will arrive sometime in 2023. 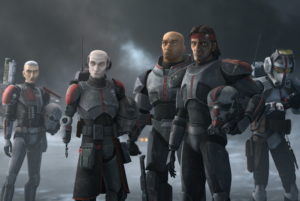 Hard to believe it’s been over a year since Star Wars: The Bad Batch wrapped its first season. If you’ll recall, I was anything but excited for a show surrounding the misfits of Clone Force 99, who debuted in the final episodes of The Clone Wars. But the first season turned out to be an exciting addition to the larger story, with characters who have come to mean a lot more than their unique abilities.

While it was expected the series would return for season two just about right now, it was revealed at D23 that it will actually debut the first two episodes on January 4th 2023 on Disney+. There will be 16 episodes in total.

The first season largely dealt with a split within Clone Force 99, as the most twisted member of the group, Crosshair, remained loyal to the Empire following Order 66. His teammates went their own way and struggled to find their place in this new Empire-dominated galaxy. They also befriended Omega (voiced by Michelle Ang), a rare female clone whose abilities seem to encompass their own. When the season ended, Nala Se, a scientist from Kamino was kidnapped by the Empire and forced to lead their cloning process.