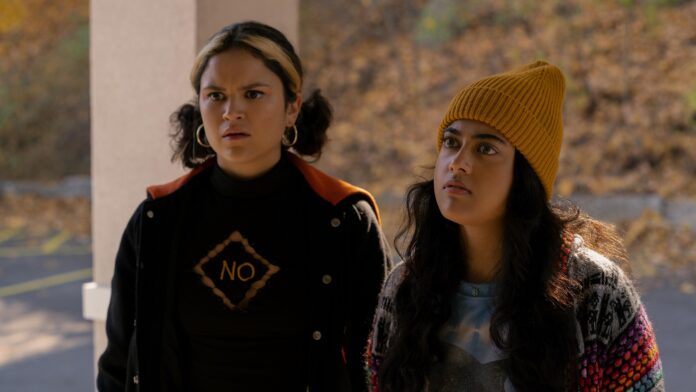 Making the jump from acting to directing seem easy, Natalie Morales has had quite the busy year already. Her feature directing debut, Language Lessons, was a standout at SXSW just a couple of months ago. And already she’s back with another film, a teen road trip comedy titled Plan B, which arrives on Hulu on May 28th.

Morales’ film makes for an interesting entry in the road trip genre. It’s rare to see one led by two women of color, and that alone should give this a different feel from others we’ve seen. The story follows two high school girls as they try to buy Plan B before time runs out, making for some pretty hilarious talk about sex…including the first time I think I’ve heard a female compare her vagine to the Transformers. I can dig it.

The cast is led by Kuhoo Verma and Victoria Moroles, who are giving me some serious Never Goin’ Back vibes. This is about the strongest compliment I can possibly give. Looking forward to this.

After a regrettable first sexual encounter, a straight-laced high school student (Kuhoo Verma) and her slacker best friend (Victoria Moroles) have 24 hours to hunt down a Plan B pill in America’s heartland.