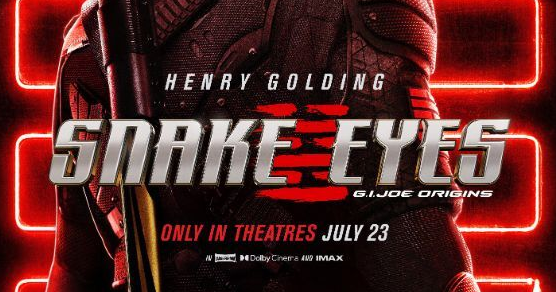 A Snake Eyes movie was my dream as a wide-eyed 8 year old. It simply didn’t get cooler then that, no words, no look, just ass-kicking ninja action. Well, my dream is fulfilled and already I’m iffy. Snake Eyes: GI Joe Origins, which hits theaters on July 23rd is capitalizing on the Joes greatest hero but I have to wonder if they learned anything about the character before making the movie. Snake NEVER unmasks….ever. It’s literally part of his core character. Now, I get it, you don’t cast Henry Golding and NOT let people see his Hollywood handsome face, but why cast him then? You make think I’m going overboard but Hollywood doesn’t have a great track record when it comes to movies featuring a masked character, who then takes off his mask….Judge Dredd anyone? 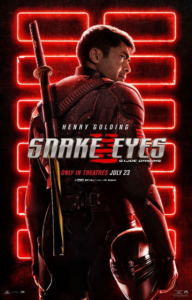 Ok, if I think I’m going a bit overboard now…after all, its Origins right? So maybe he’s horribly scarred by the end of the film forcing him to wear the mask. Now, the comics/cartoons never confirmed the reason Snake was always masked so that’s area they can play in. I’ll give credit where credit’s due, the stills we posted yesterday did look pretty awesome, so I suppose I should reserve judgement. We’ll make sure to get you a trailer just as soon as we have it, then we can get as judgy as we want to!