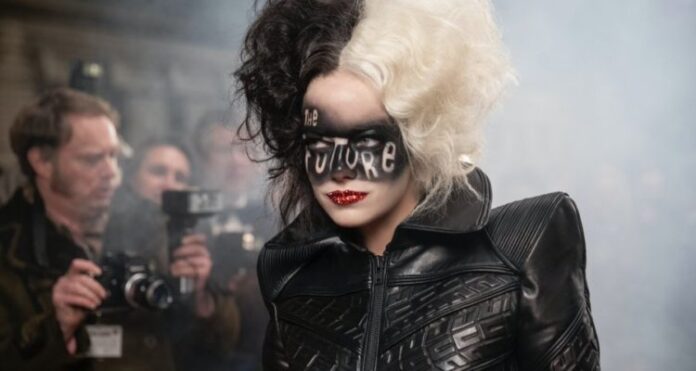 Masking a poorly-fitting retcon of one of their iconic villains with an awesomely eclectic soundtrack, Disney’s Cruella works if you’re willing to accept a sympathetic turn for the cruel (I mean, it’s in her name!) fashionista who wanted to skin 101 Dalmatians because she really liked fur coats. Emma Stone’s version of the character bears no resemblance to de Vil other than a striking haircut, but there’s still some fun to be had with this glitzy, pop art origin story that’s basically The Devil Wears Prada in a new outfit.

Stone embodies a dastardly, but not quite malevolent aura as Estella, a misfit kid (played as a child by Krypton‘s Tipper Seifert-Cleveland) bullied in school for her weird black and white hairdo and poor upbringing. Estella is a nice girl, for the most part, but she has no problem fighting back in defense of herself and others. She even has a love for dogs, befriending a stray mutt and making him her own. But after pushing the school administration too far, Estella is kicked out and she departs for London with her single mother. Along the way, her mother makes a mysterious stop at a ritzy gala only to be killed by a pack of guard dalmatians who were in pursuit of the nosey child.

Racked with guilt, Estella takes to a life of petty street crime alongside her newfound pals, Horace (Paul Walter Hauser, I Tonya) and Jasper (Joel Fry, Yesterday). But as the years go by, Estella decides she wants to take her love of fashion to the next level. Her insane, punk rock style and brazen attitude catches the eye of The Baroness (Emma Thompson), who takes her under her devil’s wing, mainly to steal the young upstart’s best ideas. When Estella finds out something truly awful about the already-heinous Baroness, she manifests her Cruella personality and sets out to get revenge by destroying her mentor’s career.

Set in the 1960s, Cruella takes advantage of the unique U.K style of the period, with costume designer Jenny Beaven almost certain to win another Oscar for the flashy get-ups on display. Production design absolutely kicks with energy, and you’ll find yourself admiring the swinging London vibe when the story starts to stall out, which it does in fits and starts. More than 40 tracks clutter up the soundtrack, but the needle drops are so damn funky you won’t care too much. Cruella doesn’t sound like your typical Disney movie and that’s a good thing.

The problem I had with Cruella is that it’s tough to buy this softening of the character. Unlike Maleficent (why is it always the Disney villainesses who need a fresh coat of paint?), which goes out of its way to provide motivation for her Sleeping Beauty heelishness, Cruella just throws the character out altogether. Your mileage will vary on whether you can accept her as a dalmatian-loving PETA advocate, but it didn’t work for me. Screenwriters Dana Fox and Tony McNamara don’t seem to understand who she is supposed to be, either. Is she an antihero? A good person? And it’s not as if the filmmakers, which include director Craig Gillespie, don’t recognize what’s happening. At one point, Cruella blurts out how dalmatians would make a great fur coat, teasing the murderous side we all expect. It leads to something entirely different and wildly inconsistent. The characterization of Cruella is all over the map, and we’re just meant to accept it because The Baroness is so much worse.  At least she’s consistently evil. We always know where she’s coming from. Cruella, not so much. There’s something of a love story at play here, too, between Cruella and Jasper. As much as I enjoy Joel Fry playing the straight-man for once, this entire subplot is a distracting mess.

However, it’s a joy to watch Stone delight in playing Cruella and all of her many personalities, which she changes as frequently as her outfits. Stone slips easily between the softer Estella and the wicked Cruella, and audiences will be inclined to cheer on her hijacking of the fashion world. Sparks fly whenever Thompson is on the screen, though, sinking her teeth into a character that is closer to Cruella de Vil than Stone’s, ironically. If you told me The Baroness actually became the iconic 101 Dalmatians baddie I’d have believed you. That would have been a fun twist, actually.

Cruella opens in theaters and Disney+ Premier Access on May 28th.