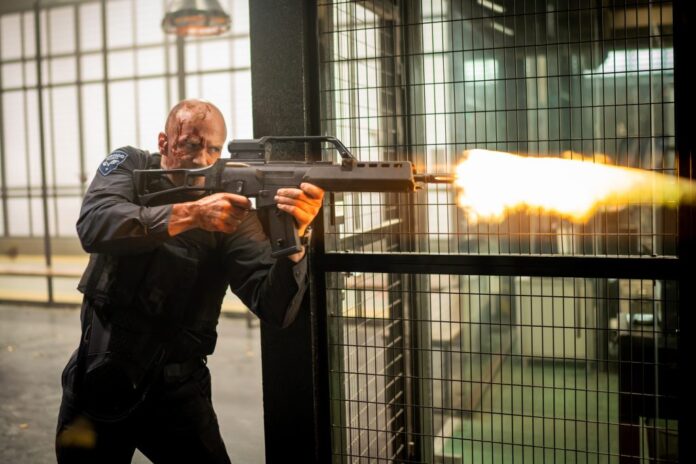 Man, I didn’t realize how much I missed Guy Ritchie/Jason Statham movies until we got them again! The careers of both really had a rocket strapped on during the ’90s and early ’00s with Ritchie’s run of British gangster movies, before both went on to things definitely bigger, but not necessarily better. Wrath of Man is the first of two movies they have coming up (the other is spy film Five Eyes), and if you’re a fan of Ritchie and Statham it’s an absolute must-watch for delivering the gruff, killer action we expect while delivering something more than just your typical crime thriller.

Ritchie successfully transplants French crime flick Le Convoyeur‘s story of high-stakes thievery and vengeance to L.A., where armed robbery of cash trucks is very much a common danger. On the surface, this seems like a very simple tale of revenge, but Ritchie, who also co-wrote the script, fleshes it out with enough character detail that it can thrive even when Statham isn’t on screen, which is the case for long stretches.

Shot in vintage style reminiscent of a Golan-Globus classic, Wrath of Man swoops in to introduce us to H (Statham), a mysterious new hire at a private security firm, transporting hundreds of millions of dollars a week in armored cash trucks. Paired up with the chatty veteran Bullet (Holt McCallany), H goes through the rigorous training process that is more like what the police go through. The company has stepped it up since one of their trucks was robbed, and the guards killed along with an innocent bystander, an event shown in the movie’s opening moments. H passes the test, but something isn’t right about him. The others, who H doesn’t really get along with at all, think of him as a “dark horse.” He’s too good for this gig.

That proves true when H and the curiously-named Boy Sweat Dave (Josh Hartnett, equally curious that he’s in such a minor role) are ambushed by a heavily-armed group, one of which includes pop star Post Malone in a laughable performance. Statham vs. Post Malone? It goes exactly how you think. H, cold as ice, takes out the attackers with brutal precision. When the same thing happens again while H and Bullet are on the job, it becomes clear that we’re not being told the whole story about who this guy really is.

What surprised me most about Wrath of Man is how sprawling it turns out to be, for a film that basically revolves around only a couple of events. H’s backstory is revealed in flashbacks, clueing us into his plans for vengeance and the impressive means at his disposal. The film also takes significant time to explore another group who are destined to cross H’s path, a team of disgruntled soldiers led by the highly-intelligent mastermind Jackson (Jeffrey Donovan), and featuring loose cannon Jan (Scott Eastwood). It isn’t hard to figure out why their paths eventually converge, but it’s a collision course we’re dying to see because so much is put into establishing motivation. The dialogue is basic, homophobic “locker room” talk and that’s going to offend some but makes sense considering the world these characters inhabit. Best to just be aware of it.

It does take a bit more of an investment than your typical Statham brawler, but the payoff is worth it. As the title suggests, Wrath of Man is extremely dark, very grim stuff, with Statham playing the quiet, enigmatic killer role that he was so good at before chatting it up in films like Hobbs & Shaw. You could argue that a few minutes could be trimmed to make room for more Statham kick-ass, since most of the extreme violence (it earns the R-rating) comes from gunfights and an excessive amount of headshots. The supporting cast is tremendous although many of them aren’t given a lot to guy, including guys like Laz Alonso, Raul Castillo, and Eddie Marsan. Rob Delaney a couple of fun scenes as a real cheerleader for H’s skills, and Andy Garcia does just enough as a cop hot on H’s trail to make you wish he had a bigger part. Irish actress Niamh Algar is also a welcome addition as the tough-as-nails officer Dana Curtis, suggesting a bright future for her on U.S. shores in movies just like this.

Setting Statham’s character outside of the central heist, and yet linked to its success or failure, is an interesting move. For the final act of the film, the perspective isn’t necessarily from H, but from the criminals. As such, we have a pretty good idea how things are going to turn out. I mean, these are bad guys after all, and bad guys aren’t to be trusted even amongst one another. But Wrath of Man weaves H’s retribution into the crime seamlessly, and has us eager to see his wrath finally unleashed.

Wrath of Man opens in theaters on May 7th.