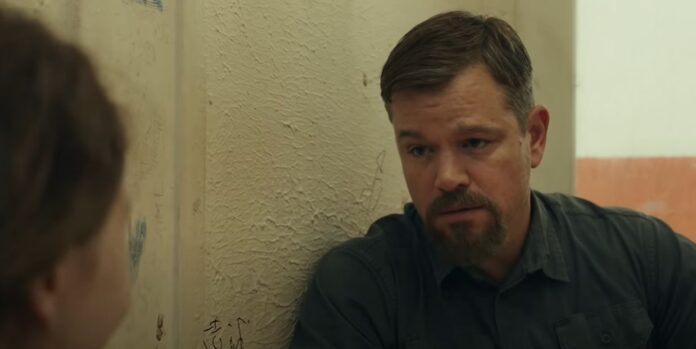 “I would do anything for my kids”, something every parent says but thankfully few of us are every put in a position to test what the definition of “anything” could be. Matt Damon’s new thriller, from Oscar Winner Tom McCarthy, Stillwater seems to show what lengths an Oklahoma oil-rig worker will go to for his daughter, after she’s falsely accused of murder in France. Damon and McCarthy are both ringers in their respective fields and based on the footage included in the trailer below, Damon is most definitely not phoning it in. It’s an intriguing premise to be sure. A father set on proving his daughter’s innocence is one thing, but adding the foreign aspect brings it to a whole new level…not only are all the rules and systems we know different but, as the trailer shows, you’re an outsider who isn’t going to be taken in well by the locals.

A dramatic thriller directed by Academy Award® winner Tom McCarthy and starring Matt Damon, Stillwater follows an American oil-rig roughneck from Oklahoma who travels to Marseille to visit his estranged daughter, in prison for a murder she claims she did not commit. Confronted with language barriers, cultural differences, and a complicated legal system, Bill builds a new life for himself in France as he makes it his personal mission to exonerate his daughter.

You Can See Stillwater In Theaters July 30th.