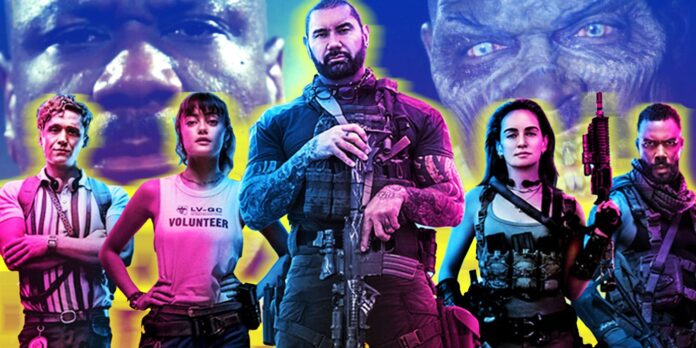 Zombie Elvis, undead showgirls, a mutated tiger Joe Exotic would kill for, and an impossible heist mission. What the f**k is there not to love about Army of the Dead?? Zack Snyder’s return to the genre after 2004’s Dawn of the Dead, still considered by many to be his most successful film, is an exhilarating, hilarious, genre-flipping thrill that will be an easy one to revisit over and over.

Not only is Army of the Dead a great showcase for Snyder, but it gives Dave Bautista one of the richest roles he’s had yet. For all that he’s accomplished for Marvel and elsewhere, true lead roles for him have been rare. I would liken his performance here as mercenary-turned-burger flipper Scott Ward to his role in the little-seen action flick, Bushwick. It’s a performance that leans on his physicality, humor, and ability to show a bit of vulnerability when called for.

The opening montage is straight bonkers, set to a soaring rendition of “Viva Las Vegas” as Scott and his team survive a full-on assault by a zombie horde, rescuing as many people as they can along the way. Imagine the avalanche of walkers in World War Z, only in much more colorful dress (this is the glitz and glam of Vegas, baby!) and you get the idea. Snyder, who also acts as DP and co-writer on the film, just has an eye for the sheer campiness that comes with zombies as a whole. The danger of them is only trumped by how much campy fun can be had with them, and Snyder gets it. There are no end of visual sight gags, but the most enjoyment you’ll get out of it comes from the characters themselves. He captures the crazy over-the-top gore and violence with such enthusiasm it practically leaps off the screen.

A veritable suicide squad of offbeat and colorful misfits, the cast includes Ella Purnell as Scott’s estranged daughter, a volunteer helping refugees on the border; Theo Rossi as an abusive border patrol agent; Omari Hardwick as Vanderohe, a soldier with a philosophical streak; Ana de la Reguera as Cruz, one of Scott’s closest friends; Nora Arnezeder as a tracker and guide known as The Coyote; Tig Notaro as the mouthy pilot; and Matthias Schweighöfer as the breakout character by far, Ludwig Dieter, a German safecracker who really isn’t built for the sort of mission they’re about to go on. The always-reliable Hiroyuki Sanada (who can be seen right now as Scorpion in Mortal Kombat) plays the mysterious benefactor who comes to them with a job to break into a vault underneath a Vegas casino to secure $200M that was left behind.

What’s the catch? Oh, nothing…just that the government is going to nuke Las Vegas off the map as a means of ending the outbreak once and for all. So the clock is winding down before that missile hits and money will be the last thing on anybody’s mind.

With that much money on the line it’s a given that everybody has their own agenda, which is all part of the fun. Some have altruistic motives, while others considerably less so, and how these goals intersect heightens the already-thick tension among the crew. But in the middle of it all there’s one friendship that forms which had me wanting a spinoff just following them. I couldn’t get enough of the odd bond that grew between the flimsy, histrionic Dieter and the gruff, dismissive Vanderohe, but as his guard drops he shows more of his intellectual side. The two are just a perfect mismatched pair and I’d pay to see more of them.

Even the zombies are pretty cool, and yeah, most of them are just shambling wrecks but others are faster, more agile, and have a heightened level of intelligence. In what could be seen as laying the groundwork for future movies, there’s a whole hierarchy among them that’s pretty interesting if expanded upon. Snyder, who co-wrote the script with Joby Harold and Shay Hatten, are clearly planning for a potential franchise. If that happens, he might want to think about trimming the hefty 2 1/2-hour runtime. As much of a blast Army of the Dead may be, it can’t sustain the energy for that amount of time and it really hits you just at the time when you should be most pumped up for the big getaway.

We talk often about Zack Snyder’s love of comic books and the superhero genre. Whatever you think of him and his DC Comics stuff, his appreciation for those characters shines through. I think we can start heaping the same praise on him for zombie films, as well. If Army of the Dead is the start of Snyder’s career rising up from the grave, I’m all for it.

Army of the Dead will open in select theaters on May 14th, then exclusively on Netflix beginning May 21st.