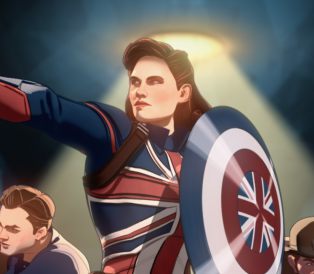 What If? has got to have the best potential for fun of all the Marvel TV series shown on the original slate, with the only possible competitor being Loki. The series, and it’s source comic arc(s) are basically a professional version of what everyone did with their friends when sitting around talking comics, “What if that spider bit Harry Osbourne instead?” or “What if Cap never went into the ice?”. These questions are basically ice breakers to some awesome rabbit holes you could fall down.

Now that we are through the first major arc in the MCU, there are plenty of places to derive content for this format. We know a few of the stories they’ll be following for sure, What if Agent Carter got the super soldier serum and became Captain Britain, and What If – Marvel Zombies. We also know that many of the heros will be featured, and Doctor Strange will feature prominently. I have to imagine that this would work if they bookended with live action Doctor Strange going into his “see the future possibilities” yoga seizures, and the animated portion being his view of the things that could  have happened.

One thing we know for sure is that no expense was spared in the animation section. The hi-res images we have today are proof of that. There’s definitely something different about the style, it almost seems mo-capped or rotoscopped ala A Scanner Darkly and while I’m usually not on-board with non-traditional animation styles there is something about this that I really dig.

No solid release date has been set, but the promise for Summer 2021 has been made. Looks like current expectations are putting the debut in August. If I had to guess the official premier date announcement will hit at some point during Loki‘s run on Disney+ next month.