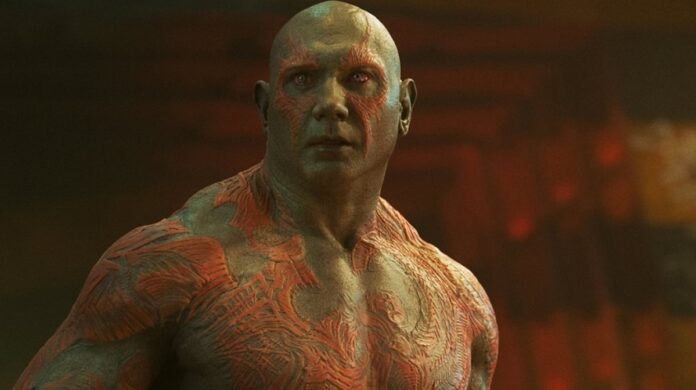 When Dave Bautista was cast as Drax in Guardians of the Galaxy, he was probably the least-known of everyone, unless you were a WWE fan. He managed to take Drax, the quietest member of an offbeat team that included a taking raccoon and a talking tree, and make him extremely popular. With Guardians of the Galaxy Vol. 3 coming in 2023, and James Gunn already saying it will be his last, what does the future hold for Drax?

Bautista doesn’t know. He told Digital Spy that everything is pretty much up in the air past the next film, but at one point James Gunn wanted to do a Drax and Mantis spinoff…

“I don’t know what the script of the third film is, to be honest with you,” Bautista said. “There was a script years ago that obviously is going to have to change because the whole direction of the Marvel universe has changed.”

“There were talks for a while about a Drax and Mantis film”, he added, saying there’s been no followup since then.

A Drax and Mantis project would’ve been a fun look at the odd couple, but I don’t know how it would’ve worked unless they did it in a series, which Bautista recently told Joblo he would never do for Marvel.

That means, unless we see him pop up in other movies as he’ll do in Thor: Love & Thunder, we could be seeing Bautista as Drax for the last time…

“I don’t think they’re very interested, or it doesn’t fit into the way they have things mapped out. But other than that, no. I mean, as far as my obligations, I’ve got Guardians 3, and that’s probably going to be the end of Drax.”

That’s Goddamned depressing, if you ask me. But then, Bautista may have burned a bridge or two at Marvel with his impassioned defense of Gunn a few years ago. He was pretty public about his willingness to leave, and maybe that’s what they’re allowing him to do. It’s not like he’ll be hurting for work, and there’s always the possibility of a jump to DC to play Bane.