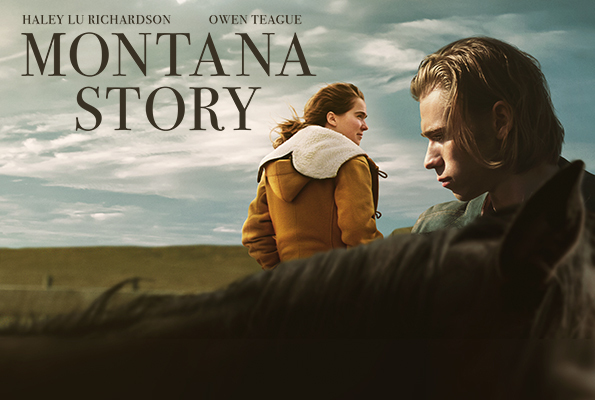 The sun peaking over the mountain ranges in the opening scenes of Montana Story, the stirring if gradual family drama by directors Scott McGehee and David Siegel, are like something out of a postcard, or a screensaver. Beautiful, yes, but there’s discord in Big Sky country between siblings Cal (Owen Teague) and Erin (Haley Lu Richardson), estranged for years but brought together in the wake of their father’s stroke which has left him in a coma.

Montana Story might not be your typical Western, but it’s right in the wheelhouse of McGehee and Siegel. The duo have been telling sensitive, insightful stories about complicated families including neo-noir The Deep End, the wonderful Bee Season, and underrated Henry James adaptation What Maise Knew. Their films are the sort that linger in the mind, but don’t exactly explode off the screen. There are no major blowups here, and certainly no tumbleweed-filled gunfights. It is a simple drama about hard-scrabble lives, buried resentments, and the clash between those who live off the land and those who take from it.

Cal arrives home to the shadowy, lonely ranch to find his father hooked up to machines, being cared for by the friendly nurse Ace (Gilbert Owuor), and family housekeeper Valentina (Kimberly Guerrero). The lack of horses on said ranch says a lot: the place is in disrepair. We soon learn that the patriarch thought himself a cowboy but truly he was a lawyer, and apparently not a very nice one. The only horse left is the 25-year-old Mr. T, a beloved friend to Erin, who returns home after seven years away in New York only to find that Cal plans to put the arthritic animal down. It is just one of many conflicts simmering between the two, a big one involving their abusive father and a violent attack on her that Cal could’ve prevented. There’s no happiness in this reunion. Erin is cold, detatched, only showing any passion for Mr. T, who she refuses to let Cal kill. She’d rather take the animal back to upstate New York. Cal is resistant to Erin bullying her way around, but only a little. He’s on edge at every moment.

Your mileage will vary on Montana Story depending on your interest in the big secret hanging between Cal and Erin. The performances by Richardson, incredible as she always is, and Teague offer the best shot to draw viewers in.At this point I would cast Richardson in any film about how a region can fundamentally mold and shape a person, as she’s a grat here as she was in the architecture-driven Columbus. Her Erin, as well as Teague’s Cal, are tough midwesterners. The frontier runs in their blood, but at the same time they both fled elsewhere and that has become a part of them, too. Moments shared between them are justifably tense, but occasionally we see glimpses of happy times. They are, inevitably, tinged with sadness and bitterness. In one, Erin cheerfully invites Cal out to a giant landfill, a place of past childhood memories. But the moment is spoiled when she suggests Cal should be thrown into the lowest pit of Dante’s Hell, the one reserved for betrayers of special relationships. Later, when this tense tango finally comes to a head, Erin is raw and unsparing about the pain she felt at a perceived betrayal. For Cal, you can almost see a sense of relief to finally unburden himself rather than sitting with the feelings of guilt that Erin’s arrival has caused.

The leads are joined by a wealth of Indigenous talent filling out the co-starring roles, crucial in completing our picture of Cal and Erin’s father, who defended corporations that poisoned the native lands. There’s Joey (Asivak Koostachin), a childhood friend left behind when Cal and Erin departed. He’s Valentina’s son, and worries about his mother who has dedicated her life to the family but will have nothing after sale of the ranch. There’s also Mukki (Eugene Brave Rock), a horse whisperer dubious of Erin’s plans for Mr. T. If anything, there needed to be more explanation for Ace, who just seems to exist to be a sensitive voice within a tempestuous household. But who is he really? There aren’t many, as in none, Black people in that part of Montana so how does a Kenyan end up there doing what he does? We learn a little of his backstory but he is largely an interesting cipher.

Montana Story opens in theaters on May 13th.