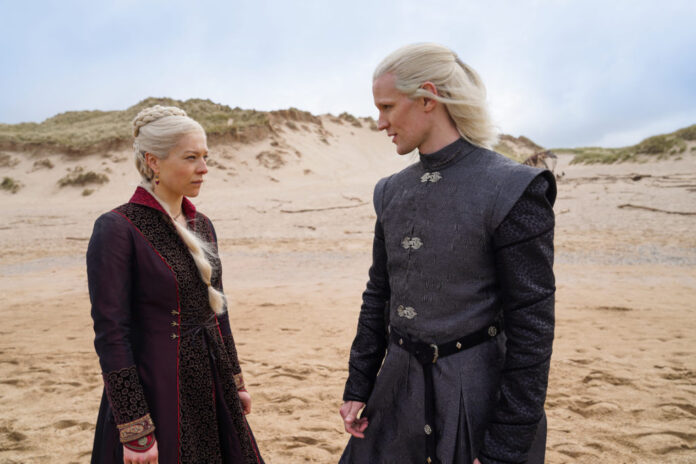 The final season of Game of Thrones really pissed fans off, and HBO has some making-up to do. The first thing they attempted was to launch into a bunch of potential spinoffs, but when that didn’t work out the decision was made to focus on one, House of the Dragon, which has finally entered production and we’re getting our first images.

What you’ll take away from them? Yes, this is indeed a Game of Thrones show. A prequel taking place before the events of the previous series, the focus is on House Targaryen, the same clan that gave us the Mother of Dragons herself. You’ll recognize all of the blonde hair, for sure. It’s a family trait.

HBO has released a description for each character pictured:

Emma D’Arcy as “Princess Rhaenyra Targaryen”: The king’s first-born child, she is of pure Valyrian blood, and she is a dragonrider. Many would say that Rhaenyra was born with everything… but she was not born a man.

Matt Smith as “Prince Daemon Targaryen”: The younger brother to King Viserys and heir to the throne. A peerless warrior and a dragonrider, Daemon possesses the true blood of the dragon. But it is said that whenever a Targaryen is born, the gods toss a coin in the air…

Steve Toussaint as “Lord Corlys Velaryon” (“The Sea Snake”): Lord of House Velaryon, a Valyrian bloodline as old as House Targaryen. As “The Sea Snake,” the most famed nautical adventurer in the history of Westeros, Lord Corlys built his house into a powerful seat that is even richer than the Lannisters and that claims the largest navy in the world.

Olivia Cooke as “Alicent Hightower”: The daughter of Otto Hightower, the Hand of the King, and the most comely woman in the Seven Kingdoms. She was raised in the Red Keep, close to the king and his innermost circle; she possesses both a courtly grace and a keen political acumen.

Rhys Ifans as “Otto Hightower”: The Hand of the King, Ser Otto loyally and faithfully serves both his king and his realm. As the Hand sees it, the greatest threat to the realm is the king’s brother, Daemon, and his position as heir to the throne.

The series was co-created by George R.R. Martin and Ryan Condal, with the latter also writing each episode. While there’s no confirmed release date, 2022 seems like a good bet.