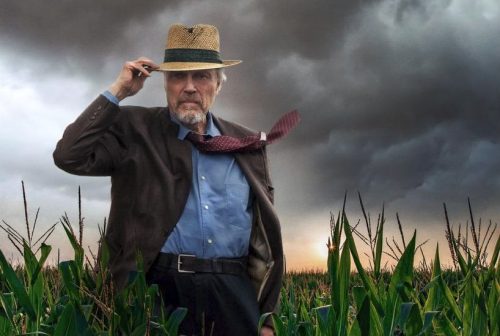 How excited are you for a legal drama on a court case involving canola seeds? Yeah? Getting pretty hyped? Probably not, but then Percy vs. Goliath isn’t about canola in the same way Erin Brockovich and Dark Waters weren’t really about groudwater. It’s about the little guy taking on the overwhelming money, power, and influence of giant corporations, and winning against all odds. It’s a small-scale underdog story with simple values and big emotions, and a fiery turn from Christopher Walken who seems to have found renewed energy in playing the real-life champion of farmers everywhere, Percy Schmeiser.

Based on a true story, Percy vs. Goliath is about Schmeiser, a Canadian man whose farm has been in his family for generations. He’s an old school grower, one who takes pride in his “seed saving” techniques that have allowed him to grow fresh, strong crops out of the previous year’s yield. But when gigantic agro-business Monsanto suddenly files a lawsuit against him, claiming that traces of their genetically-modified formula were found in Percy’s crop, he’s suddenly fighting a fight nobody believes he can win, and it’s a fight he must take around the world, from Canada to India and ultimately the Supreme Court.

You’re not going to find a lot of nuance here. Director Clark Johnson with screenwriters Garfield Lindsay Miller and Hilary Pyror are going for the biggest anti-corporate, anti-globalization bang for the buck. Monsanto seems to overrun with shady white guys in suits, hanging around the farms of poor, rural folks just barely ekeing out a living. You get lots of high-minded speeches about fighting back against such crushing overreach, and idolizing of the farmer who is struggling to feed themselves just so they can put food on our tables. If you’re open to that sort of rhetoric, and admittedly I am, then this movie will punch all of your buttons.

Christina Ricci, channeling a little bit of Julia Roberts and Reese Witherspoon, plays Rebecca Salcau, an environmental who enthusiastically backs Percy’s cause, teaching the reclusive farmer how to get out there and be the public face of a movement. Meanwhile, Zach Braff plays Percy’s overmatched attorney, Jackson Weaver, one of those cinematic “good” lawyers who takes a case on faith and because it’s the right thing to do. His partners are more interested in the money, of course, and encourage a settlement.

This is all by-the-numbers stuff but sometimes that works. It’s good to see Walken playing a believable character, and not one that seems molded by the actor’s eccentric personality. Percy is a bit of a curmudgeon; he’s liked by some people in his community but not by others. When they turn against him, due largely to Monsanto’s smear campaign calling him a “seed stealer”, it affects him deeply. His wife Louise (Roberta Maxwell) also feels the sting of the town’s rebuke.

Other than a trip to India where Percy spreads his message to an international audience and encounters the tragic death toll associated with Monsanto, the film doesn’t offer much variety in the locales. The cinematography when outdoors is beautiful, with wide, open shots of the fields suggesting the freedom that guys like Percy Schmeiser value most. Aspects of stories such as this have been Hollywood fodder for years, in particular this one has elements seen in the underrated 2012 drama At Any Price. Everybody likes to back a longshot, and Percy vs. Goliath harvests that desire while getting rid of anything that stands in the way of easy entertainment.

Percy vs. Goliath opens in theaters, digital and VOD on April 30th.