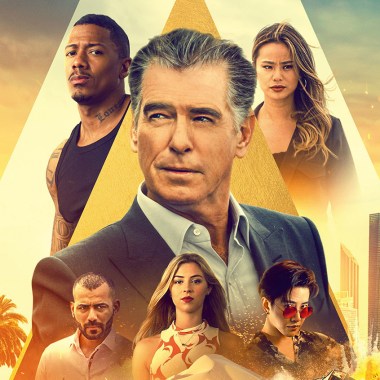 Okay, so on paper there’s a lot the kid in me who grew up on action movies should love about The Misfits. It’s a heist film directed by Renny Harlin, known for Die Hard 2, Cliffhanger, The Adventures of Ford Fairlane, and more. Even the cast isn’t too bad with Pierce Brosnan, Jamie Chung, Tim Roth, Hermione Corfield, and Nick Cannon on board. However, the trailer doesn’t look great, and my hope is that it’s saving some of the best stuff for later.

Set in the Middle East, The Misfits follows a group of modern-day Robin Hoods who recruit a renowned thief to pull off the heist of the century. The film was co-written by Kurt Wimmer, very familiar with Brosnan after working together on The Thomas Crown Affair, another all-time favorite of mine. Again, there’s a lot about this movie that I should like.

Also in the cast are Rami Jaber and Mike d Angelo.

The problem is that it can’t escape looking like a knockoff Fast & Furious, and Harlin, who used to be a favorite, hasn’t directed even a solid action movie in ages. He’s found new life working overseas, primarily in China on films such as Skiptrace, Legend of the Ancient Sword, and Bodies at Rest, none worth writing home about. Unfortunately, The Misfits doesn’t look much better. I hope I’m wrong.

The Misfits opens in theaters on June 11th, Digital and VOD on June 15th.

Even a federal maximum-security prison can’t hold Richard Pace (Golden Globe nominee PIERCE BROSNAN), a brilliant international thief. But his daring escape and high-octane car chase, eluding the FBI and police, ends with him being scooped up by The Misfits, a band of modern-day Robin Hoods. Led by the eccentric and charismatic Ringo (NICK CANNON) with Violet (JAMIE CHUNG), the Prince (RAMI JABER), and Wick (MIKE ANGELO) with Pace’s daughter Hope (HERMIONE CORFIELD)- a mysterious group who do devious things for all the right reasons. The skilled group convinces Pace to join them to pull off the heist of the century: stealing millions in gold bars kept under one of the most secure prisons on earth, owned by rogue businessman Schultz (Tim Roth), and used for funding terrorist groups worldwide. Aside from the money, Pace wants revenge against Schultz, the man behind his incarceration. From LA to Abu Dhabi, it will take supercharged engines, forged identities, multiple cons, camels, nitro and massive explosions to succeed. Directed by RENNY HARLIN (Die Hard 2: Die Harder, Cliffhanger), THE MISFITS brings a new team of outsiders into the world of action-adventure.