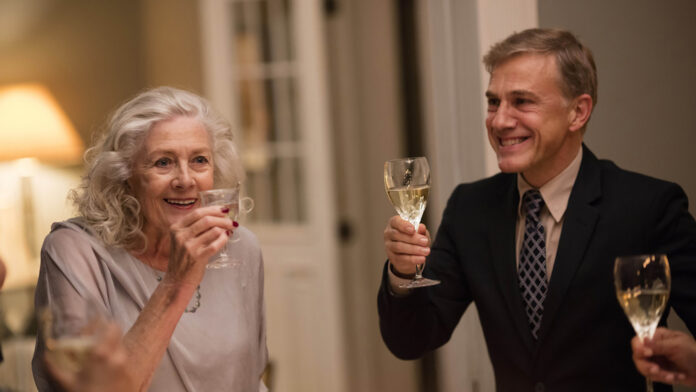 Six years ago Christoph Waltz set out to make his directorial debut with a film titled The Worst Marriage in Georgetown, based on the true story of social climber Albrecht Muth, and chronicled in the pages of the New York Times.  We’ve heard little about it since then but Paramount has now revealed the first trailer for Georgetown, which finds Waltz directing and starring in a twisted game of murder and deception alongside Oscar winner Vanessa Redgrave and Oscar nominee Annette Bening.

Some of the quirkier aspects of Waltz’s persona come to the fore in this trailer, in which he plays Ulrich Mott, an eccentric schemer who worms his way into the life of the aging, wealthy Elsa Brecht, much to the chagrin of her daughter. When Elsa ends up murdered, Ulrich is the obvious suspect, and a deeper charade begins to unravel.

The script was written by David Auburn (The Lake House) and has Brett Ratner as one of its producers, which may explain why the film has flown under the radar.

Georgetown opens in select theaters and VOD on May 14th.

GEORGETOWN stars Waltz, Academy Award® winner** Vanessa Redgrave (Julia) and Academy Award® nominee*** Annette Bening (American Beauty). In this thrilling true crime story filled with twists, turns, and political turmoil Waltz stars as Ulrich Mott, an eccentric and smooth-talking social climber who seems to have everyone in Washington, D.C. wrapped around his finger. But when his wealthy, well-connected and much older wife (Redgrave) turns up dead in their home, her daughter Amanda (Bening) suspects Ulrich may not be all that he seems as the police investigation begins to uncover a larger deception that goes far deeper than anyone ever imagined.