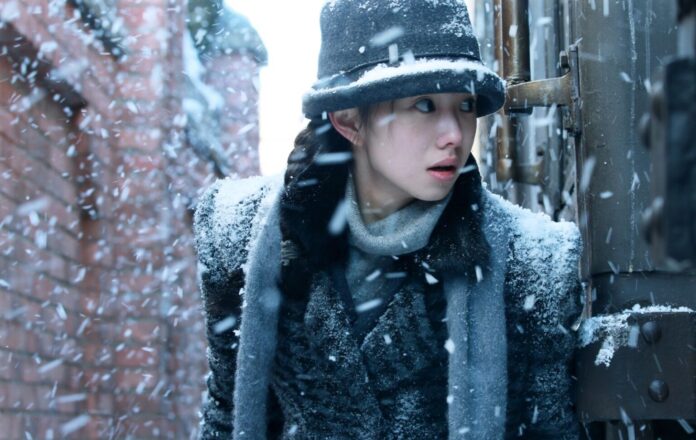 Zhang Yimou will perhaps always be known for his colorful wuxia martial arts films, such as House of Flying Daggers, Hero, and 2018’s double-identity film Shadow. It’s that last one which most-closely informs Yimou’s first foray into the spy genre, Cliff Walkers, an elegantly-told, handomely-made historical drama of impossibly-high tension that is only cooled by the icy setting and convoluted story.

Cliff Walkers is a tale of double-crosses, betrayals, and a suicide mission in 1930s Manchukuo, a puppet state formed by Japan after their invasion of Manchuria. It’s here that four Communist spies trained in Russia; married couple Zhang (Zhang Yi) and Yu (Qin Hailu), and young lovers Chuliang (Zhu Yawen) and Lan (Liu Haocun); parachute down into the dark, snowy forests, Yimou painting this picture of the danger and artistry of the scene. Their task is to rescue a hostage who can expose war crimes committed by the Japanese, so it can be revealed to the rest of the world.

A brief, terse order to split up leads to some tense goodbyes, but also clues us in to the likelihood any of them will survive this particular gambit. Even worse, as all of this is happening the Japanese have learned, through torture of an intended handler, of the plan’s existence. They are ready for the spies, which leads to chaos as they must figure who can be trusted, while the Japanese agents are right on their tails. 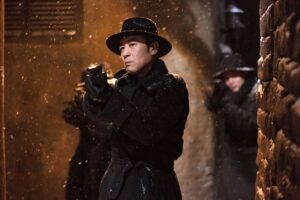 While the story is set in Manchuria, the mode of dress, all long black coats and black fedoras, gives the feeling of a Chicago-style gangster film. Unfortunately, it also makes characters tough to distinguish, which is already hard because of so many criss-crossing agendas and twisting subplots. None of the Communists are particularly well-distinguished in the beginning, either. That does change over time, however, with Lan a standout for her awestruck innocence that gives way to surprising lethality when called upon. The other character to get a bit more to do than others is Zhou (Yu Hewei), a double agent whose neck is seemingly always on the chopping block. Yu is fantastic here, his personality shifting from one moment to the next. It’s the kind of slippery performance you want to see in a spy movie and that every good one has.

Yimou keeps the action brisk and the stakes high. Even if you can’t keep up with what’s going on, the film is so stunning to look at and the tension so elevated it doesn’t really matter. It’s surprisingly violent, too, with brutal tortures, executions by firing squad, and more than one shootout piling up the body count. There’s also one very good car chase sequence, with Yimou’s camera weaving between the vehicles as they slip and slide across the frozen streets. It shows Yimou doesn’t need rainbow colors and flying swordsmen to dazzle his viewers. And fortunately, since this film is ultimately a tribute to the men and women of the Communist revolution, the government won’t feel the need to censor it as they’ve done so many of his other works and it will release in both the U.S. and China on the same day. True to its title, Cliff Walkers walks a fine line of being too distant and messy, but Yimou pulls a high-wire act too exciting to pass up.