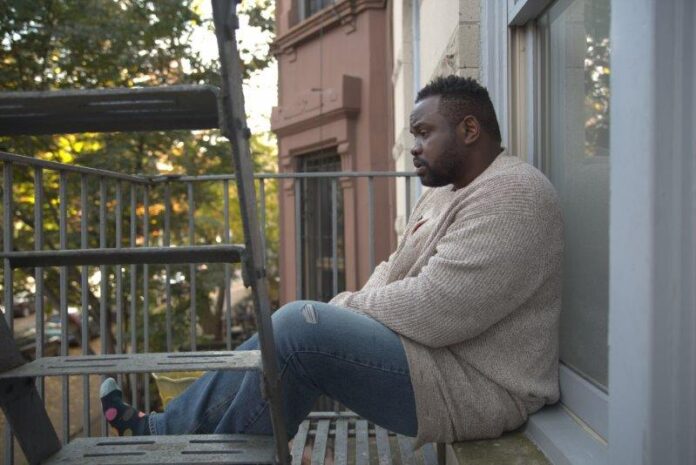 Going outside, talking with your neighbors, and exploring your community. What a novel idea! As we’ve been under lockdown for more than a year, such concepts might be considered alien at this point to plenty of us (not those who don’t care about social distancing) thanks to Covid. But as we are starting to flatten the curve and get vaccinated, we’ll soon be outside and free to frolic… and just in time for the summer too. In a sense, we all somewhat will be able to identify with Charles (Bryan Tyree Henry), who is someone who spends all his time isolated indoors, until he gets locked out of his apartment in The Outside Story.

Charles is a video editor who specializes in cutting in-memoriam videos for celebrities prior to their deaths (talk about an isolated and depressing job), while he also works on his documentary and is completely fine being a homebody. One night of the boring and repetitive partying at a club, he meets Isha (Sonequa Martin-Green), who also just wants to stay at home and chill, and the two hit it off. Unfortunately, Isha isn’t on the same wavelength as Charles for long and ends up cheating on him, which prompts him to break up with her.

Now in addition to being isolated, Charles is nursing a broken heart. He continues his routines: cutting in-memoriam video footage and ordering takeout. Unfortunately for Charles, he ends up stiffing a food delivery person on the tip by accident, and to make amends goes outside to give the guy his tip, only to then lock himself outside of his apartment. And so goes the crux of The Outside Story. At first, Charles is frantic to get back inside. He calls his polyamorous neighbors to ask to use their stairway to try and enter his apartment through the window. We get to see Charles’s nervousness seeing people prep for group sex (especially since his girlfriend cheated on him). Of course, a random black man trying to enter an apartment through the window is bound to attract officer Slater (Sunita Mani), who everyone in the neighborhood hates for being aggressive with parking tickets, which starts their antagonistic relationship. Charles also meets a wide host of new characters in the form of his neighbors that he didn’t know before: a young music prodigy and her overbearing mother, a pregnant woman selling her comic book collection via a yard sale, a widowed woman, and countless others who not only does he interact with, but they help him navigate through his breakup with Isha. Such concepts like acceptance, jealousy, and forgiveness are explored.

The Outside Story works in large part to Brian Tyree Henry. We’ve been following him since he burst on the scene in FX’s Atlanta, but he has often be related to supporting roles. While he kills it every time, he absolutely has the charm and charisma to lead a film himself and proves it completely in The Outside Story. He’s funny when he needs to be, yet serious as well at the drop of a dime. There are a few moments where he’s able to cry on demand, showcasing his acting range. While he spends a lot of time with young actress Olivia Edward, he has the most connective chemistry with Sunita Mani. He and Mani go back and forth very well, and when the two make peace, there’s just a moment where you kind of root for them to be a couple. Speaking of couple, if fans of Sonequa Martin-Green are coming to see her as Isha, they may want to temper expectations. She doesn’t spend much time in The Outside Story except in auxiliary flashbacks showcasing her and Henry’s relationship from its formation to its ruin. While the film does have a happy ending, it’s somewhat cliched and would have probably been a little more interesting and engaging if writer-director Casimir Nozkowski opted to go a different route.

Overall, The Outside Story is a fun (semi)Rom-Com that showcases just how charming an actor Henry can be. The film also gives you a much-missed sense of community that has been absent from our lives for the past year and showcases the promise of what may come once we are maskless.

The Outside Story is currently available on Digital and VOD.

The Outside Story
1 of 9