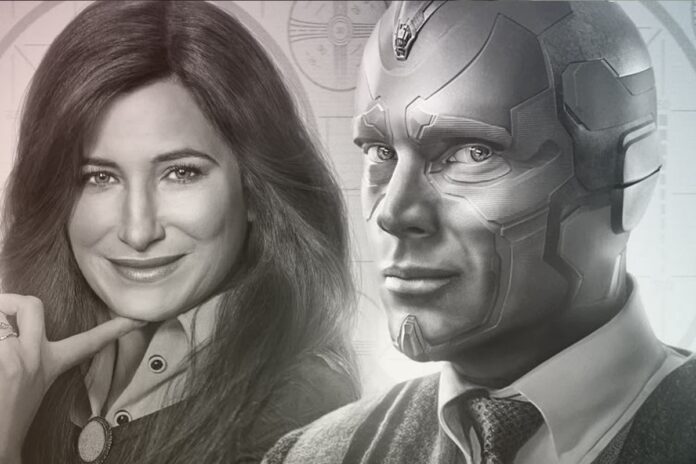 So…what are we supposed to do this week without a new episode of WandaVision? Maybe think about the future of Marvel and where some of its characters will end up? The finale teased a couple of storylines that will definitely be caught-up with, but we got nothing for Paul Bettany’s Vision and Kathryn Hahn’s Agatha Harkness. What’s up with them? Wherever they end up, both actors are eager to come back for more.

Bettany played two different versions of Vision in the show’s finale, with the white, emotionless version flying away after being given the other’s memories. While it’s pretty clear that we’ll see Vision again, Bettany was asked by Esquire if he’d be willing to play the character “forever”…

As for Agatha Harkness, she finds herself stuck as nosy sitcom neighbor Agnes in the town of Westview.  As far as villains go, Marvel doesn’t usually bring them back, but Agatha has proven so popular it has to happen, right?

“I have no idea. They keep it really tight,” said Hahn to New York Times about Harkness’ return. “I want to. Now that I have a taste of it, I’m like, ahh. I really, really love it.”

“I actually don’t think, ultimately, that she minds it. She needed to rest for a hot second. She’s been very restless. I think she was very lonely, for a very, very long time. She loves having the companionship — loves the mailman, loves Ralph, loves Dottie. For the moment, I think she’s actually OK to just loosen the corset and sit and have a muffin and a latte.”

Don’t worry, Agatha will be back and I think next time we see her it won’t be in an antagonistic role, but as a mentor to Wanda. Maybe a mentor with her own agenda, but she won’t purely be a villain.

WandaVision is available now on Disney+ is worth revisiting.