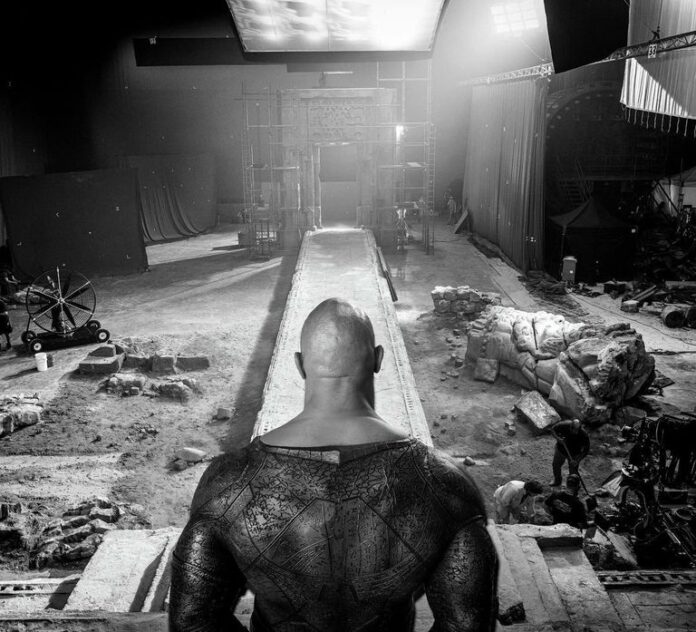 Dwayne Johnson’s involvement with Warner Bros. and the DCEU began more than a decade ago. Anybody remember when he was going to play Lobo? Or when he basically had his pick of playing either Shazam or Black Adam? Obviously, he chose the latter and has been the most vocal hype man for the movie ever since. With the film in production right now, his social media is the place to go for the antihero flick’s progress.

And um, if you just want to see Johnson showing off his muscles and shit.

Johnson revealed devastation in his latest production image, which he hopes will clue you into the film’s massive scale of destruction. But what he really wants is for you to look at his massively chiseled back…er, I mean Black Adam’s costume. Although this shot is in black & white, it’s still the best look we’ve had at how it will look.

Frankly, it doesn’t look that special to me. But perhaps we really need to see it in color and in action. You just can’t get a sense for these things in still photos.

Here’s what Johnson had to say…

“On set. BLACK ADAM. This image of Black Adam from behind gives you a tactile sense of the absolute massive scale and size of our movie.

“You also see a little of the intricate and beautiful textured detail of Black Adam’s body suit (this is not your typical DC or Marvel muscle suit). And finally you get a glimpse of the enormous and appropriate destruction.”

“As we all know, superheroes have a code of justice and don’t kill the bad guys. But, Black Adam does. The hierarchy of power in the DC UNIVERSE is changing. Antihero. Man in black. Protector of his people.”