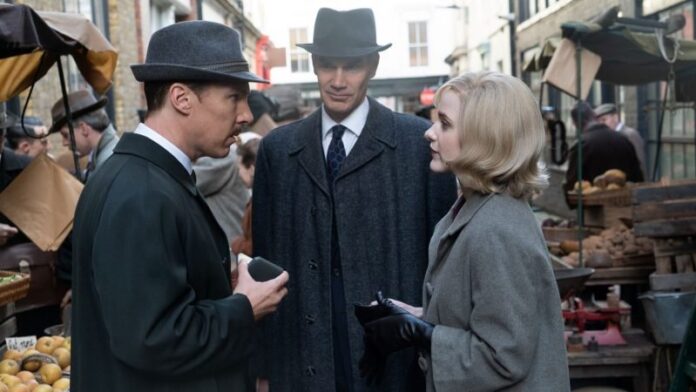 Hey look, the original title Ironbark certainly wasn’t great, but it’s better than The Courier. Not even fans of Benedict Cumberbatch are going to remember to see him in this Brit spy drama, which premiered last year at Sundance. But perhaps this new trailer will help keep the film in the front of mind, as it makes a point of highlighting co-star Rachel Brosnahan of Marvelous Ms. Maisel and I’m Your Woman accolades.

The film stars Cumberbatch British businessman Greville Wynne, who is recruited by MI-6 and the CIA to be a spy during the Cuban Missile Crisis conflict of the 1960s. Brosnahan plays a CIA operative helping Wynne avert a nuclear disaster.

Rounding out a pretty terrific cast are Jessie Buckley, herself receiving some awards buzz for I’m Thinking of Ending Things, and Homeland actor Merab Ninidze.  Behind the camera and making his sophomore effort is Dominic Cooke, who impressed with On Chesil Beach back in 2017.

The Courier opens in theaters on March 19th.

THE COURIER is a true-life spy thriller, the story of an unassuming British businessman Greville Wynne (Benedict Cumberbatch) recruited into one of the greatest international conflicts in history. At the behest of the UK’s MI-6 and a CIA operative (Rachel Brosnahan), he forms a covert, dangerous partnership with Soviet officer Oleg Penkovsky (Merab Ninidze) in an effort to provide crucial intelligence needed to prevent a nuclear confrontation and defuse the Cuban Missile Crisis.