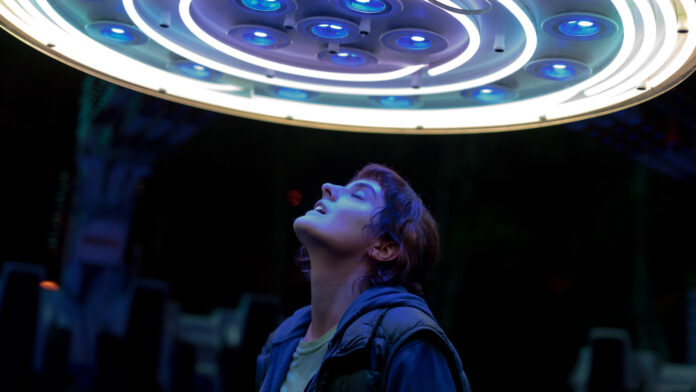 Humans have had a long fascination with machines and that obsession frequently makes it to the silver screen. The Iron Giant, Herbie Fully Loaded, Transformers, pretty much anything made with a motor and metal, has been seen at the movies. The new French film Jumbo takes that tradition a step further.

Written and directed by Zoé Wittock, Jumbo premiered at last year’s Sundance film festival, which seems appropriate for this film. Visually entrancing and undeniably weird, Jumbo seems right up the alley of the late-night Sundance crowd. The film follows the quiet and isolated Jeanne as she starts a new night janitorial position at her favorite amusement park. Still living with her mother (Emmanuelle Bercot), Jeanne prefers to make models instead of dating and socializing with people her own age. Very quickly she is drawn to a new attraction, The Move-it, which she calls Jumbo. Soon her attraction grows into something more complicated, stirring up her emotions and relationships.

Noémie Merlant, who plays Jeanne, shines the most when working with the theme park ride. Her ability to play off of a giant piece of equipment is astonishing and is a testament to Merlant’s talent. Her Jeanne teeters the edge between unhinged and euphoric. You may feel uncomfortable but you can’t look away. If her previous film, the highly acclaimed and revered Portrait of a Lady on Fire, is what made her renowned, then Jumbo is the film that shows her range.

Because this is a French film about a woman who can only experience romantic love with an amusement park ride, some scenes might be too odd for American audiences (Wittock gets pretty creative with oil). However, whenever my American sensibilities wanted to pull out, Wittock’s visuals brought me back in. The way she chose to characterize Jumbo, almost like an alien, cools down and softens the concept of a human being sexually attracted to a machine.  If anything the film has very similar plot points to Guillermo del Toro’s The Shape of Water just with a claw amusement park ride.

The one malfunction Jumbo has is inconsistent pacing. Thirty minutes in and we already know Jeanne is full-on in love with Jumbo. From there, you can never tell where it’s going. At about 75 percent of the way through the film, the pacing seems to halt completely.

While Jumbo seems like a bizarre and off-putting concept, Merlant’s acting with Zoé Wittock’s direction exposes a universal truth: we can’t always help what we are attracted to and shouldn’t be judged for it. When Jeanne does have sex with another person its mechanical and unfeeling, completely the opposite of the passionate affair with the attraction. As someone points out to Jeanne’s mother, “ If she’s not hurting anyone, why do you care who she loves?”

Overall Jumbo is an enticing ride that worth a watch at least once.

Jumbo is now available on virtual cinemas and on VOD and DVD March 16th. Watch the trailer below.