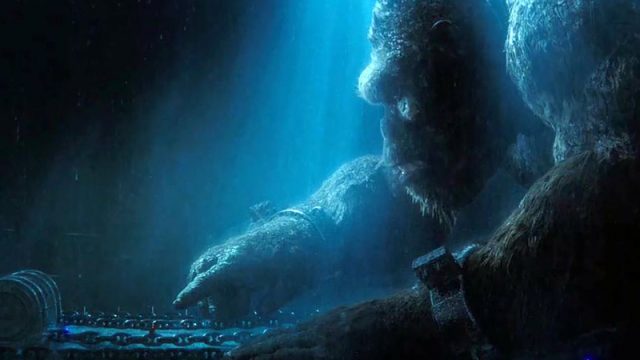 If there’s someone to feel sorry for in Godzilla vs. Kong, it’s definitely not the gigantic, iconic kaiju slugging it out on the big screen for the first time in sixty years. No, it’s the people. As we’ve seen in previous MonsterVerse films, it’s the humans who always wind up in the middle of the carnage, and that’s no different in the upcoming blockbuster’s first clip.

Released by director Adam Wingard during IGN Fan Fest, the clip shows what IGN says is the first time we “see Godzilla MEET King Kong for the first time.” The footage doesn’t actually support that, but that’s alright. What we do get is Godzilla taking out fighter jets (and thus, killing the pilots) with a single swipe of his tail, then dragging a destroyed boat underwater after its anchors get stuck in his armor plates. Well, damn, they’re dead, too!

Kong is there, too, apparently being transported from Skull Island, but he doesn’t do much other than scream out in frustration while Godzilla lurks underneath. I’d be upset over this, but I think we’ve already seen quite enough of these two punching one another.

Godzilla vs. Kong opens in theaters and HBO Max on March 31st.