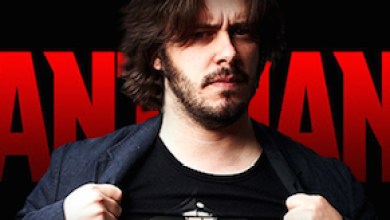 Remember when Edgar Wright was going to direct Ant-Man? That film had been in the works since before the MCU began. He wrote up a script, alongside Attack the Block‘s Joe Cornish, and shot test footage for it, too. Wright was on that film through 2014 when he left over creative differences and was replaced by Peytonn Reed. The rest is history. There had been no conversations between Wright and Marvel’s Kevin Feige since the big split, but it’s recently been revealed that all is cool now between them.

What went down with Marvel has been a sore subject with Wright ever since, and he’d avoided Kevin Feige as a result. But while doing a piece for Empire Magazine on Greatest Cinema Moments of All Time, Wright wanted to include something from Marvel Studios, and reached out to Feige about it.

“I’ll be honest, I had not spoken to Kevin since I walked off Ant-Man in 2014. You know, there wasn’t any real animosity or outright hostility between us, it was all very diplomatic at the time, but in that situation you go your separate ways and there was no reason to get back in touch. So I just had never spoken to him or vice versa. Aside from the movie itself, we had been friends, so it was a sad thing – aside from the professional aspect of it, we had been good pals.”

“I thought it would be disingenuous of me to get through this article without mentioning the ‘M’ word once. So I did what I hadn’t done in six years – I just emailed Kevin. It was a really nice thing, and Kevin was really touched that I’d reached out to him directly and just said, ‘Hey.’ Also it was funny after six years of no contact to email him just saying, ‘Kevin, I need you to write something for me, and I need it tomorrow!’ So it was nice, we basically reconnected over this article and it was very sweet…I’m very glad I did it, and I was very happy that his response was so — he was really touched that I had reached out, and I feel what he wrote was great.”

That’s a pretty cool little story. Nothing bigger than that, I guess, just two friends reconnecting over Marvel, right? Come on, we all hope this leads to Wright doing something for Marvel in the future, don’t we?  I still watch Ant-Man and think what might’ve been.

Anyway, next up for Wright is his psycho-thriller Last Night in Soho which opens in October. [Empire]