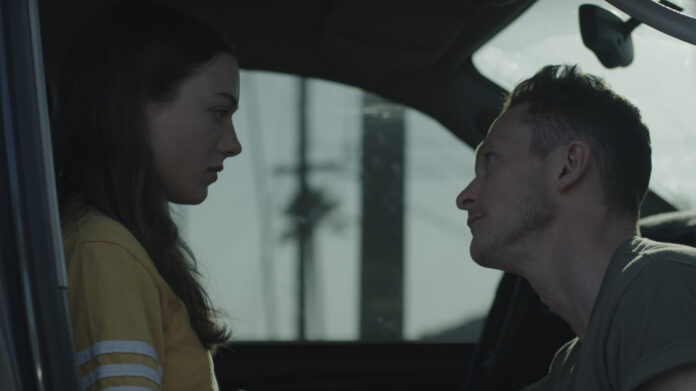 A 17-year-old girl meets an older man and falls in love. In any other movie, a relationship like that is romanticized. Not in Jamie Dack’s unflinching and lo-fi take on a predatory relationship between a teenager and a 34-year-old man.

Palm Trees and Power Lines is told entirely from Lea’s (Lily McInerny) perspective as we follow her around on summer break. Tired of spending her days partying with friends and bickering with her mom (Gretchen Mol), she meets Tom (Jonathan Tucker) after a dine and dash incident.  The much older man intreges her and soon she starts to call upon him more and more.  However, it isn’t long before the fairy tale she hoped for becomes a lot more dangerous than she imagined.

Dack tells a raw and unnervingly accurate story that many women know all too well. She does this by keeping everything you see and hear as natural as possible. There is no non-diagetic sound, meaning the song you hear, the characters hear as well. Dack uses a lot of natural light to make the film feel as realistic as possible.

As a director, Dack subtly emphasizes just how infantile 17 can really be by accurately and playing up and depicting the age difference between the couple. McInerny’s delivery is often whiney, rooted in sayings a parent tells a child in order to protect them. Lea isn’t “mature for her age,” but rather a normal 17-year-old who still has a lot of growing up to do – just like anyother young adult woman.

With any other telling of this story, the male lead has some sort of endearing quality that shields the heroine and audience from his true intentions. Tucker’s Tom feels more obvious. His actions have no nuance. We see why Lea is attracted to him, but its not enough to endear us to Tom. The characterizations that Dack infuses in the script, along with the acting choices of Tucker and McInerny, bring out the age differences instead of hiding them until the end.

Based on her short film of the same name which premiered at the Cannes Film Festival back 2018, Dack struggles with pacing issues. Palm Trees and Power Lines is a slow build. However, when we reach the height of Tom’s gross behavior, something happens to Lea that feels unearned, like the tension escalated too quickly.

One of many films at this year’s festival that focuses on predatory behavior and power dynamics, Palm Trees and Power Lines won’t hold your attention in a way that Fresh will. However, Dack’s raw and natural style of storytelling is something to be commended.