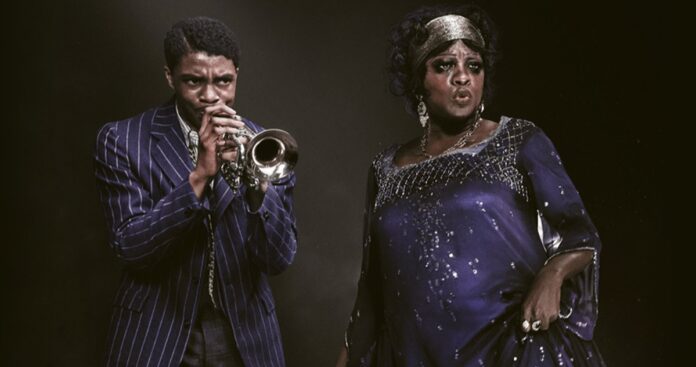 It’s tough to watch Ma Rainey’s Black Bottom, George C. Wolfe’s adaptation of the August Wilson play, without recognizing it as the final screen role for Chadwick Boseman. What makes it even tougher is that he’s so damn good in this soulful drama, based on an installment in Wilson’s famed “Pittsburgh Cycle”, exploring the black experience in America through the decades. As ambitious jazz trumpeter Levee, Boseman gives a performance that is fiery, flawed, intense, but also nuanced in exploring the dichotomy of a proud black man who seeks a successful future for himself while also kowtowing to the white men he needs to attain that success.

That Boseman manages to shine when up against a dynamic, blazing Viola Davis as the titular blus diva Ma Rainey, is a testament to his skill that will be sorely missed. The film is set in 1927 and takes place almost entirely inside of a recording studio on a hot Chicago day. It’s here that Rainey, real-life singer regarded as the “Mother of the Blues’, has agreed to come in and record an album by her twitchy white manager Irvin (Jeremy Shamos) for dubious (and clearly racist) exec Sturdyvant (Jonny Coyne). After a big opening number prepares us for the brassy, bluesy sounds of the next 90-minutes, we’re introduced to the intricacies of Rainey’s band: loyalist trombone player Cutler (Colman Domingo), poetic pianist Toledo (Glynn Turman), and reserved bassist Slow Drag (Michael Potts), and then there’s Levee, who has a chip on his shoulder that might as well be a brick.

What’s interesting about Ma Rainey’s Black Bottom, well, one of many things, is that it doesn’t become about her until much later. For the most part, this is a movie where a bunch of black men of different generations and philosophies, sit around in a room and bullshit to one another. Their personalities clash at almost every point and over many different topics: Cutler and Levee clash over the latter’s brash attitude and disregard for Ma Rainey; Toledo preaches about racism in America and how black people are unappreciated for their contributions; Slow Drag just wants to get it done and go home. The conversations they have, some forty years prior to events in Regina King’s One Night in Miami, nevertheless prove very similar. How do talented people of color navigate the needs of their career with a need for social justice. Do they owe this country anything when it’s this country that looks down on them and holds them back?

When Ma Rainey finally enters the picture, her personality as big as her heaving chest and big, bold voice, she only adds to the sweaty tension. Already behind in schedule, Ma delays it further with request after request, from bottles of Coke to demanding her stuttering nephew recite the opening to “Ma Rainey’s Black Bottom”. Ma wields what power she has like a knight brandishing a sword. She does this because she knows her worth, understanding that she only means anything as long as she can make others rich. Without her voice, which they need, she would mean nothing to anybody.

“They don’t care nothing about me. All they want is my voice”, Ma says. “I don’t stand for no shit. They going to treat me the way I want to be treated no matter how much it hurt ‘em.”

And she’s right. The difference between Ma Rainey and Levee is that she has come to grips with it, and has learned to play the game. But Levee is young, arrogant, naive, and angry that he needs white America if he’s ever going to reach Ma Rainey’s heights.

The second recent adaptation of Wilson’s “Pittsburgh Cycle” after Denzel Washington’s Fences (he’s a producer here, reuniting with Davis in a way), Ma Rainey’s Black Bottom owes a ton to its ensemble performances. The casting of Davis is pitch perfect here, as in some ways Ma Rainey’s demands mirror her own career. Who can forget her calls to be paid equally as Oscar winners of her class, recognizing that all of the accolades have not been met with the same financial rewards as white actresses.  As Ma Rainey, Davis struts and shimmers sexually across the screen, in caked-on black eyeshadow, stopping only long enough to spit venom and whoever, be they black or white, dares to defy her.

Davis overshadows just about everybody with the exception of Boseman, whose Levee arrives in fresh golden shoes and flashes a toothy Cheshire grin that hides a world of deep-rooted anguish. It’s hard not to notice how thin he looks now that we know to see such things, but even when appearing frail his performance is tough and feral, with Levee appearing like a caged animal about to strike. His is a tragic story, and you can see his fatal flaws everywhere, but that only makes him more captivating to watch.

The thing about Wilson adaptations to film, and this goes for Fences, too, is that his words contain so much rich, emotional power that they are better suited for the stage. It’s too easy for a film director to get lost in the artistry, so that it takes a little something away from the performances. Given the towering, Oscar-worthy displays from Davis and Boseman, it should tell you something about how great they are in Ma Rainey’s Black Bottom, and the strength of Wilson as a writer and chronicler of the black story.

‘Zola’ Interview: Colman Domingo On Playing The Sinister “X” And Why He’s Not Such A Bad Guy