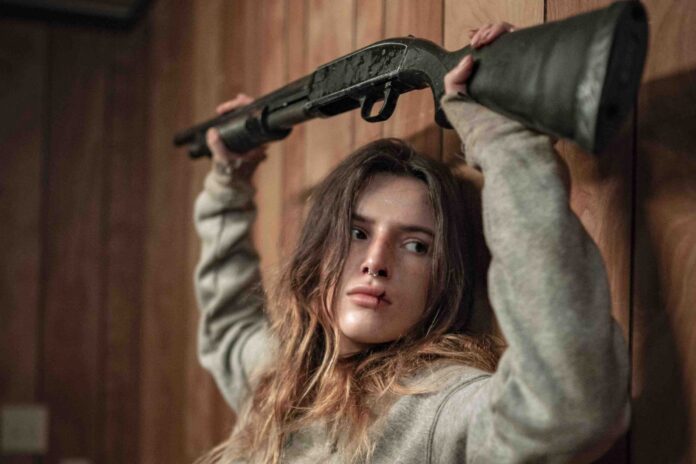 It’s impossible to escape the specter that seems to follow around the stars of Girl, the gritty new film from director Chad Faust. You can’t go a day without Bella Thorne making headlines for something or another, while co-star Mickey Rourke was a sex symbol back in the day before personal demons caught up with him. But the celebrity scandals that follow these two stars on differing ends of the generational scale shouldn’t distract from their performances, in particular for Thorne, who is at her best.

Girl isn’t a flashy film by any means, but it attempts to add some depth to the typical revenge movie. Thorne, looking dirty, unkempt, and miles away from what her Onlyfans subscribers are paying for, plays a young woman, only credited as “Girl”, who returns to her Texas hometown for more than home cooking. We see her, looking desolate and pale on a bus riding into town. A phone call to her disabled, abused mother finds them both dancing around a truth neither wants to admit in the open; the girl is there to kill her estranged father for the terrible things he’s done.

When she arrives, it’s easy to see why somebody would leave, but not so clear why anybody would ever return. To call it a backwater Hellhole would be too generous; it looks like a bomb hit it, and the only things to survive were cockroaches in human form. The first person she meets is the local sheriff (Rourke), who creepily offers her a ride and won’t take no for an answer. Rourke, whose physical transformations have been buzzed about for decades, now looks like he is wearing a human mask ala Leatherface and it adds to the creeping menace of his character.

Arriving at the local watering hole, a place frequented by her father and the sheriff, Girl is confronted by wary faces staring back at her. Everyone there has a secret about her father, who was mixed up in some bad shit. She also faces more sketchy dudes just begging to be split open by the handy-dandy ax in her bag. That’s right. Girl is packing an ax and isn’t afraid to use it.

Faust easily could’ve kept this on the familiar path of retribution we’ve seen a million times before, but upends that when girl arrives at her father’s place only to discover that someone has beaten her to the punch. What does someone do when they’ve had payback stolen from them? In her case, it’s only the beginning as the sheriff and his creepy sidekick, Charmer (played by Faust), are on her trail for something of value her father may have hidden.

I’ve been a big fan of Thorne as she has taken increasingly mature, challenging roles. Most of the projects she’s chosen to star in and produce, as she does Girl, have in some way fed off of her public persona. But the choices she makes are more inspired than I think she is given credit for. In the case of Girl, we get to see her as a tough, resourceful, and stubborn young woman with a serious chip on her shoulder. But as all of that anger gets pulled out from under her character, Thorne gives a richer performance as the girl learns that all secrets are not equal, and how easy it is to corrupt our memories of how things used to be. Everyone around her thinks she is either trash or without threat, and it’s cool to see so many of them proven wrong. She’s not a superhero, or an unstoppable killing machine, and that’s a fresh take on this kind of material and a welcome one.

Faust’s first feature as writer/director shows a wealth of confidence, especially in capturing the hopelessness of Girl’s bleak little corner of the universe. An actor (I only just recognized him from the movie Saved!) who has made the difficult jump to filmmaking, Faust shows an expert hand in the brutal action scenes. A laundromat war between Girl and Charmer is uncomfortably tense and claustrophobic, while practically every confrontation with the sheriff sends chills. While Faust’s depiction of the town is more detailed than expected, characters are left pretty much wide open with thin examination.  While a certain amount of cloudiness regarding motivation aids in the mystery, it also hinders the chance of being engaged in Girl beyond wanting to see it reach a conclusion. The drab grey and blue color scheme fits this hollow landscape, but when the plot lags as much as this tends to the combination is occasionally deadly. The 90-minute runtime feels heavy, and like Faust is always on the hunt for ways to fill saggy spaces.

The good news is he has Thorne to shoulder the load, and she is the top reason to check Girl out. This is a dark, efficient little film and while the pervasive gloominess it’s shrouded in is a lot to bear, the experience is worth it to see Thorne really step out into her own. 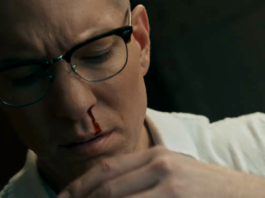 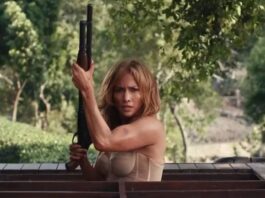 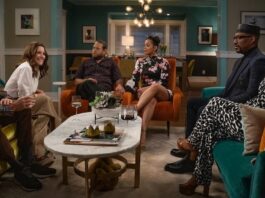