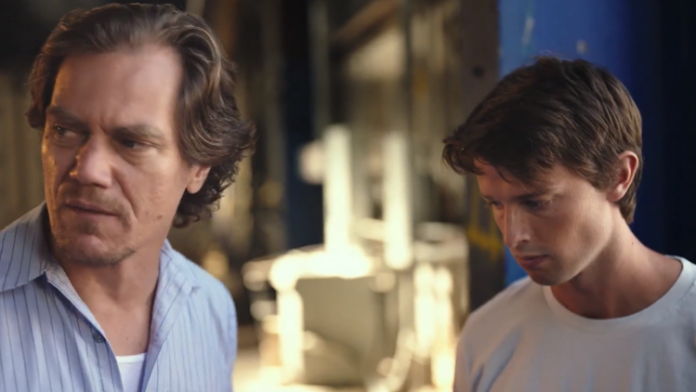 Steal from the rich and…well, keep it for yourself. That’s the anti-Robin Hood theory at play in the trailer for Echo Boomers, a heist flick starring Patrick Schwarzenegger, Michael Shannon, and Alex Pettyfer.

The son of Terminator stars as a college grad who leaves school with a ton of debt, and the realization all of his hard work was for nothing. So to get what he feels he’s due, he joins with a criminal organization to steal from the rich and keep all of the illegal gains.

With student loan debt mounting everywhere in the country, seems like a premise that could be a hook for a lot of folks. The film also stars Gilles Geary, Hayley Law, Jacob Alexander, Oliver Cooper, Kate Linder, and Lesley Ann Warren.  Behind the camera is Seth Savoy, who also co-wrote the script.

SYNOPSIS: Two-time Academy Award® nominee Michael Shannon (Knives Out) stars in this gripping crime-thriller filled with pulse-pounding twists and turns. A recent college graduate Lance Zutterland (Patrick Schwarzenegger) leaves school in debt, realizing everything he had worked towards was built on a lie. When he is pulled into a criminal underground operation, he finds his peers fighting the system by stealing from the rich and giving to… themselves. With nothing to lose, they leave behind a trail of destruction but with the cops closing in, tensions mount and Lance soon discovers he is in over his head with no way out.