There’s a youth movement going on in the Marvel Cinematic Universe. Post-Endgame we’re seeing a new crop of young stars join the superhero franchise, such as newcomer Iman Vellani as Ms. Marvel, while others such as Tom Holland step up to lead. The latest addition is Baby-Sitter’s Club actress Xochitl Gomez who is now part of the Doctor Strange in the Multiverse of Madness cast.

Gomez joins Benedict Cumberbatch as part of Doctor Strange 2, a film that is quickly becoming a main attraction with ties to WandaVision and Spider-Man 3. We have no idea of her role yet, which is par for the course, but it’s possible she could be sticking around a while. 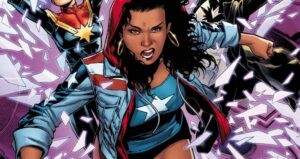 This is pure speculation on my part, but I think rumors she is playing America Chavez could be correct. While her powers would make sense given that Chavez can literally kick open portals to alternate realities, she is also very closely tied to the Young Avengers, the team of heroes that is being teased in Marvel’s Disney+ shows.

This is very clearly the biggest role yet for Gomez, who had a role in Netflix’s The Baby-Sitter’s Club, plus the films Roped and Shadow Wolves. Not much of a resume to speak of, but this will definitely change that.