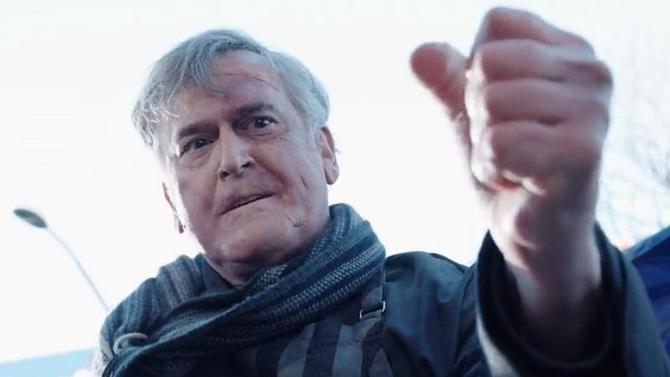 With the introduction of the Multiverse, the MCU finds itself under threat from literally an infinite amount of potential villains. But possibly the deadliest of all was first glimpsed in Doctor Strange in the Multiverse of Madness; a man who was wrong and now seeks revenge. He is…Bruce Campbell’s Pizza Poppa!!!

Campbell, a close buddy of director Sam Raimi, has a couple of cameos as the Pizza Poppa, a resident of Earth-838 where Pizza Balls are a thing and America Chavez can’t get enough of them. Unfortunately, she didn’t pay for them, and Poppa ran afoul of an ornery Doctor Strange who cast a spell that left the vendor punching himself in the face.

While a post-credits scene saw Pizza Poppa finally break free of the curse, it was pretty weak. However, with the release of the film today on Vudu we also get a deleted scene that shows Poppa vowing to get payback!

#DoctorStrange beware! In this exclusive deleted scene, the true villain of the multiverse is born. His name? The Pizza Papa 🍕