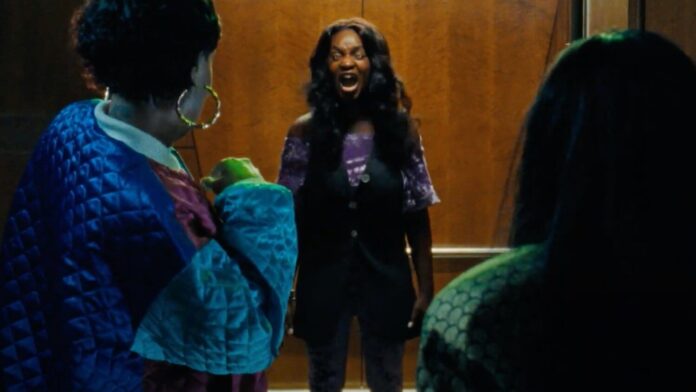 Hulu is getting into the Halloween spirit all month with their special Huluween event, and one of the centerpiece flicks is also one of my favorites from Sundance. Bad Hair is the new horror-satire from Dear White People writer/director Justin Simien, and it features the evil of our culture’s obsession with beauty.

Starring Elle Lorraine, Kelly Rowland, Vanessa Williams, Jay Pharoah, Lena Waithe, Blair Underwood, James Van Der Beek, MC Lyte, Michelle Hurd, and Laverne Cox, the film takes place on the cusp of the ’90s, a time of big hair and flashy outfits. Looking good was everything, and black women with straightened hair were perceived as being more exotic, more beautiful than women with natural hair. Ultimately, the story follows an aspiring TV producer who buys a weave with a mind of its own and a thirst for human blood.

I had a blast with this one, and also had a chance to speak with Simien about Bad Hair immediately after checking it out. Definitely check it out if you’re looking for something campy, bloody, and willing to have some fun while exploring racial concerns. I hate to use the Get Out comparison, but they both found ways to use genre to tackle issues of importance to black people, and do it in a way that triggers more than a few laughs.

SYNOPSIS: In this horror satire set in 1989, BAD HAIR follows an ambitious young woman (Elle Lorraine) who gets a weave in order to succeed in the image-obsessed world of music television. However, her flourishing career comes at a great cost when she realizes that her new hair may have a mind of its own. The film stars Elle Lorraine, Vanessa Williams, Lena Waithe, Laverne Cox, Jay Pharoah, Kelly Rowland, Blair Underwood, James Van Der Beek and Usher Raymond. BAD HAIR is written and directed by Justin Simien. Simien also serves as a producer alongside Julia Lebedev, Angel Lopez, and Eddie Vaisman. Executive Producers include Leonid Lebedev, Oren Moverman, and Alex G. Scott. The film is produced by Sight Unseen in association with Culture Machi