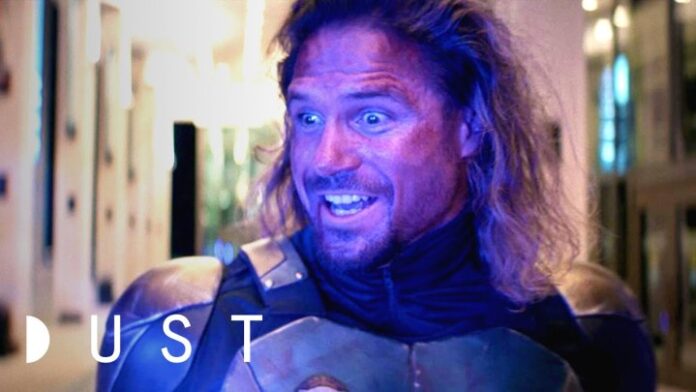 There have been a lot of really big movies over the last couple of weeks, including some that were VERY high on my must-see list for 2020. But ask me what the most enjoyable film I saw this month was and I’ll tell you right away, it was a short movie, only 12-minutes long, titled The Speed of Time. It’s a blistering sci-fi comedy starring one of my all-time favorite professional wrestlers, John Hennigan aka John Morrison aka Johnny Nitro aka Johnny Impact.

A Dust exclusive, The Speed of Time stars Hennigan as the awesomely-named Johnny Killfire, who travels back in time to save his former self (Sean Marquette) from the TimeBorgs, who are trying to get their hands on a universe-destroying app that delivers pizzas in the past before they were ever ordered. It’s a ridiculously fun twist on the Days of Future Past genre of sci-fi, and I had an absolute blast with every minute of it.

The film was directed by William J. Stribling who co-wrote with Russ Nickel. Also in the cast are Alex Jennings and fellow WWE superstar Nic Nemeth aka Dolph Ziggler in a small but very fun role.

I had the chance to talk with Hennigan about shooting The Speed of Time, using his parkour background in his action flick roles, his influences outside of the squared circle, and more. Hennigan’s physical gifts in the squared circle are well-known, and he brings his incredible agility and acrobatic skills to the film. I mean…it literally begins with him hitting a Canadian Destroyer (a flip piledriver, for the uninitiated) on some poor TimeBorg, so I had to ask him about that.

Watch The Speed of Time in full below, followed by my interview with Hennigan!