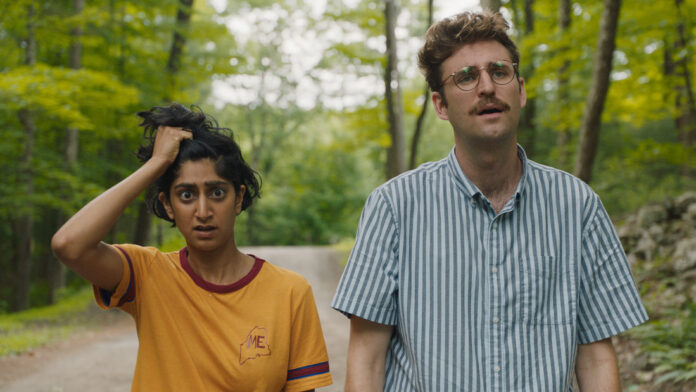 I know you’ve seen them, perhaps you’ve even done it yourself. People who “go off the grid”, turn off their smartphones, stow their computers, and get away from all of the electronic media for a while. It can be a much-needed, energizing break from always being connected. The fear, of course, is that some shit will go down and you’ll be the only one who doesn’t know. Well, that’s pretty much the central premise of the Sundance comedy, Save Yourself!, which I’m happy to say was among my favorites at the festival this year.

Starring GLOW actress Sunita Mani and Search Party‘s John Paul Reynolds, the film centers on a couple who realize their dependence on electronic devices has hurt their relationship, so they take a break from the city for a cabin in the woods, free from all social media. And what happens?  An alien invasion happens.

I attended the world premiere and was happy to be the first critic anywhere to review it, especially since it was so damn funny. It was one of those films I had heard nothing at all about, and just sorta took a gamble on it, which turned out to be a very good decision.

Save Yourselves! hits theaters on October 2nd, followed by VOD on October 6th.

Sci-Fi Comedy ‘Save Yourselves!’ Is Becoming A TV Series