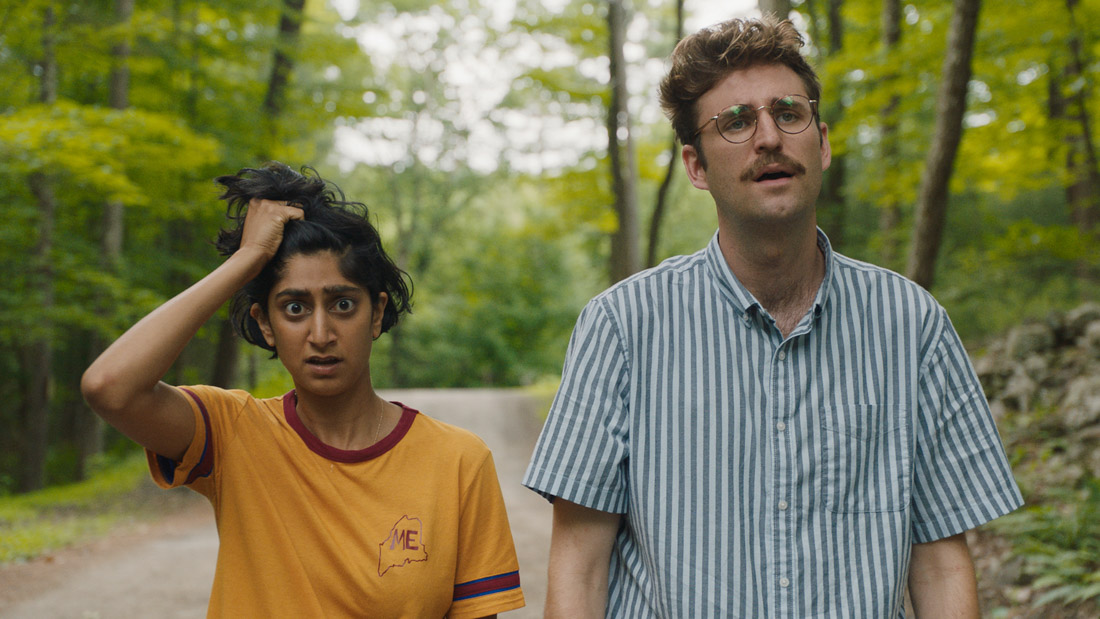 I think we all imagine the worse when we turn our phones off. That’ll be the moment something important happens and we’ll be the last to know. Well, the worst actually does happen in the hilarious, spaced-out comedy Save Yourselves!, in which a too-plugged-in couple goes off the radar for a few days and all Hell breaks loose. As in the planet gets invaded by aliens. That look like Tribbles.

The whole thing is strange, and perfect for our social media-obsessed culture in which many of us can’t bother to put our phones down during dinner. Su (GLOW‘s Sunita Mani) and Jack (Search Party’s John Paul Reynolds) are two such people. They’re so ruled by the technology at their disposal, they can’t have an argument without having to shut down Alexa first. But thankfully, Save Yourselves! isn’t a movie where we are constantly wondering whether these two are meant to be together. From the opening moments, as they lay tangled up in one another on the couch flipping through their phones, Su and Jack are a perfect mess of adult insecurities, but they’re sure about one another. You have no idea how refreshing that is to find at Sundance.

It’s the success of an enterprising friend who unplugged from social media and started a worthwhile humanitarian effort that inspires Su and Jack to get away and find themselves. No phones, no social media, no contact with the outside world. It’s during this week-long forest excursion that, shocker, an alien invasion occurs and probably the only two people in the world who don’t know shit about it are Su and Jack, who are busy realizing how woefully ill-equipped they are as people of nature. Whether it’s Jack’s lame attempts to play lumberjack (he’s no good at doing man things) or Su’s many relationship quizzes, they exist in their own little bubble that will feel familiar and comforting, if also a little bit sad at how much they don’t know, having spent so much time relying on technology to do everything. When Jack suddenly gets the random urge to build a fire, we know immediately it isn’t going to go well, and sure enough, must be the bad wood” is his excuse when it doesn’t.

Easily the funniest movie I’ve seen at Sundance this year, Save Yourselves! is the brinchild of writer/directors Alex Huston Fischer and Eleanor Wilson, who have designed this wonderful little story that feels much bigger with a DIY aesthetic that charms throughout. The alien attack can’t help but be a thing of comedy when the invaders look like Poofs you might buy on Wayfair. They prove deadlier than they look, the film is not without its share of casualties and at least one surprising twist that forces Su and Jack to take on a responsibility neither may be equipped for, and can’t just look up on Youtube.

Ironically, Save Yourselves! is a film that’ll live and die on social media buzz, so here’s hoping my little corner of the Internet is enough to help spread the word about a movie you won’t want to miss out on.