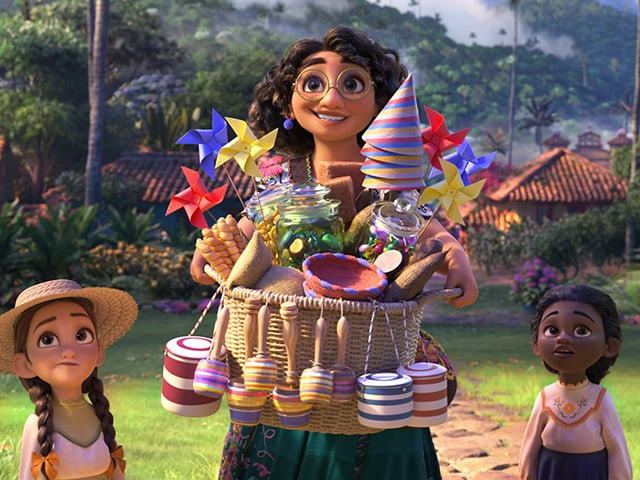 Like the 59 animated Disney films that came before it, Encanto isn’t just about a magical house and the family who lives there. Taking inspiration from Columbian culture and traditions, directors Jared Bush, Byron Howard, and co-director Charise Castro Smith weave a jubilant yet heavy-handed tale of a girl trying to overcome generational trauma.

Literally the most colorful Disney production in recent memory, Encanto centers on the ever-positive Mirabel. The granddaughter and daughter of immigrants, she lives in a magical house that can move, fix itself, and do chores. Living under the same roof are her parents, aunts, uncles, cousins, who all received magical abilities from their home when they turned eight. The entire family is headed by her domineering Abuela Alma (Maríaa Cecilia Botero), who holds tight to her traditions in fear of losing all she’s built.

Of course, Mirabel doesn’t receive magical powers and becomes the black sheep of the family, trying to help but getting in the way. Constantly belittled by her grandmother, Mirabel tries to remain positive to figure out her own destiny and why their house is mysteriously falling apart. Voicing her is the impeccable Stephanie Beatriz (In the Heights, Brooklyn Nine-Nine), who injects so much emotion and life into her vocal performance. When the plot runs thin and starts to grasp at straws, Beatriz anchors the film and makes it worth watching.

Lin-Manuel Miranda, who is having quite a year with films like Vivo, In The Heights, and Tick, Tick… Boom! (his directorial debut), once again lends his songwriting expertise Like his previous Disney team up Moana, Manuel inserts a little bit of his signature sound throughout the movie. At one point, John Leguizamo does a little rap-singy riff the Hamilton creator is known for. While the songs are fun and capture the vibrancy of the animation, most of the musical numbers blend together. You don’t walk out of the theater with a “Let It Go” or “You’re Welcome” in your head. If you can’t do that, did you even see a Disney movie?

From a story perspective, there is a lot going on. There are too many main characters to name or grow attached to. After a while, the plot doesn’t seem to know where it’s going. John Leguizamo is introduced halfway through as Mirabel’s estranged future-seeing Uncle. He does his best with a character that’s soul purpose to help the protagonist finish her quest. However like most things in Encanto, solutions just kind of appear without much reason why.

Disney films are not known for their nuance. However, Encanto overdoes its point.  With a thin plot, it over relies on the emotional narrative. After 70 minutes of watching Abuela Alma put down Mirabel, it becomes almost overbearing. When the emotional release comes at the film’s end, revealing how much Alma lost and suffered in order to seek a better life for her family, the moment feels too late. It’s a shame since the film heavily connects to the modern immigrant experience.

Overall, Encanto’s strength lies within its lead. As you’d expect Disney’s 60th feature animated film, the animation is dazzling. But Mirabel’s emotion, only made stronger by Beatriz, takes the entire film somewhere meaningful.

Encanto is playing in theaters. Watch the trailer below.